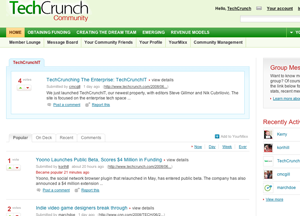 Users can now set up Mixx community sites on their own subdomains (see ours here). Administrators have the power to brand them visually, post editorial content, and even make some revenue off advertisements. Others can join as members and begin submitting items as they would regularly on Mixx. All submissions (stories, images, and videos) can be made just to a particular community, or to the Mixx site as a whole as well.

This release is more akin to Reddit’s hosted “create a Reddit” service than it is to Reddit’s new open source offering since Mixx communities are hosted and can only be rebranded to a limited extent (with custom logos and color schemes).

Just as the standard Mixx experience is divided into verticals like Entertainment, Science and Sports, communities can deploy their own tabs for niche topics. The TechCrunch community, for example, has been seeded with tabs for “Obtaining Funding”, “Creating the Dream Team”, and “Revenue Models”. To keep each of these categories alive – and therefore your community members engaged – admins can set tags that will automatically import relevant items from the main Mixx sharing stream (“google”, “arrington”, “techcrunch”, “twitter”, “yahoo” have been set as tags in our case).

Communities also come equipped with a message board and a “member lounge” that provides community overview information such as activity stats, member lists, and awards for top submitters.

Social media fanatics will enjoy this new ability to carve out their own alcoves in Mixx. I’d really like to see Mixx take the next step and allow for a completely rebranded experience so that web publishers the net over can incorporate user contributed content seamlessly into their sites. This would entail proper domain masking and thorough CSS and HTML customization, as you’d find on KickApps. Then Mixx could really claim to compete with the likes of Ning and the other social networking platforms.