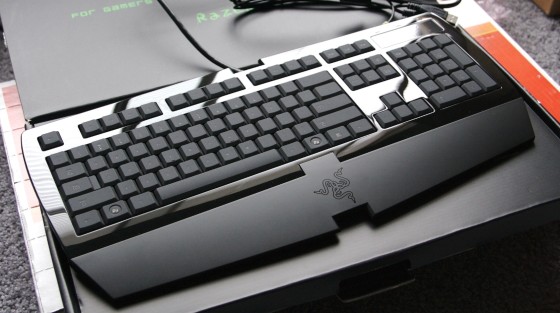 I’ve been using the same keyboard for the last, well, many many years, so it’s fitting that all of a sudden I should have several dropped in my lap. I’m currently juggling offerings from Microsoft, Razer, and SteelSeries. I can tell you right now that none of them sucks, but if you want more you’ll have to read the reviews. Today we’ve got Razer’s latest keyboard offering, the Lycosa. Sure, it sounds like the business, but does it back up its cool name with some real functionality? Click on.

Black Beauty (you know, like the horse)
Before everything else, let’s get this out of the way: this is one sexy-ass keyboard. It exudes quality as much as it does menace, so if you’re picky about how your gear looks, there are absolutely no worries on that account.

So what makes this keyboard stand out from everything else, other than its killer looks? Well, in addition to it being sleek and black, the entire keyboard is backlit. The blue is a good color, and you can read every key easily in the dark, although visibility does decrease considerably as your eyes get more level with the keyboard (it’s hard to photograph, too).

You can switch between backlight off, backlight on, or WASD mode, which is great. When you’re gaming late at night, you don’t need every key proclaiming its existence in bright blue, so you switch it over to just WASD lighting and your left hand knows exactly where to go. It works beautifully and even fades in and out. Very classy. The WASD cluster is also protected from ghosting, so you won’t be limited in the number of keys you can press at once.

The keyboard is flatter than I’m used to, and the keys have a shorter travel which, depending on your taste, can be either good or bad. I would have preferred a little bit more depth, but I adjusted quickly. It’s a little deeper than a laptop keyboard, but the keys feel better. The whole thing is covered in the same amazing non-slip surface you find on Razer mice. I think it attracts dirt, but it’s easily wiped off. Key depression is very quiet, so this is a good option for not keeping your roommate or significant other up with incessant tapping.

Functions
The little media panel on the upper right side is pretty awesome. It’s touch-sensitive and the lit-up hot spots are the perfect distance apart. I rarely hit the wrong spot and it’s responsive to holding down as well. The Razer logo in the middle can actually be used as a modifier key for changing things up about the keyboard. For instance, Razer logo + T = disable Windows key. Oh hell yes.

There are extra ports on the keyboard as well: two USB ports plus headphone and microphone jacks (those are the keyboard’s own plug-ins at left). They all functioned fine, except the microphone jack died one day for no reason at all. It’s incongruous with Razer’s excellent build quality so I’m guessing it was a fluke. Still, it’s worth mentioning. They shipped out a new one right away, as I’m sure they would for you, and it’s worked like a charm. Depending on your setup, this may help reduce cable clutter or let you move the computer to a more aesthetically pleasing position.

The software that comes with it is straightforward but powerful: reassign any key or key combo to anything, basically, including common actions, macros, or locations. Profiles for games, as well, but while I appreciate the capability, I’ve never been much of a macro-user. Maybe if I still played Quake. Griefers and scripters will be thrilled.

But?
Problems? Remarkably few. The “wrist rest” is essentially decorative, having no depth to speak of to function as an actual rest for your wrists. People used to big, fat split ergonomic keyboards will not like this thing. The media keys did work fine, but for some reason pausing was problematic in Winamp – in the middle of songs I’d hit play/pause and it would restart the song. Annoying, but not a dealbreaker. The media keys also cannot be reconfigured.

CrunchGear’s recommendation
This is a fantastic keyboard. The layout is great, the media keys work fine, and it’s sexy as hell. It’s great for gamers but it’s also suitable for anybody; there are no ridiculous frills and the look was enough to impress my design-snob parents. At $80 it’s more expensive than most keyboards you’ll find, but considering how much you are going to use it, I think the expense is justified.