Today at the Supernova conference there was a Techcrunch panel on the next great ideas in Mobile. The panelists were Michael Arrington, Kevin Werbach, Roelof Botha and Andreas Kluth. The companies that presented focused on important themes to advance innovation in the mobile environment including mobile goods, avatars, games and interfaces.

For more information on the technology some of these companies will be using, check out our Location Technologies Primer.

MobileLab is a hub for mobile phone research and innovation at the University of Texas at Dallas. The lab has support from Ericsson, TI, Apple and Samsung Mobile. Their technology overlaps persistent 3D images over the real world on your mobile phone screen. One of the initial applications is a “mobile avatar” that appears on a person’s shoulder.

Mobile Dead is a location-based mobile zombie game. It uses GPS or other location data to find your position and the position of other players. Players choose to be on either the blue team, which is the human team, or the green team, which is the zombie team. Users can message each other with twitter-like short messages. Each player has a health and experience level, and a short profile. The game is played by picking up virtual items, which can then be used as part of the game. Those items, can also be traded with other items (such as trading a soda can for a crow bar). Players pick up weapons (such as chain saws) to fight against the opposing team, with weapons having varying levels of strength and damage. The game play is like other turn-based MMORPG’s where players take turns to hit each other until one wins. When you win fights you gain experience points.

The game seems interesting, but it will require a critical mass of players to be viable (unless you want to walk around and just pick up items). The game is going to be in beta in the New York City area in July, and you can signup today if you are interested in trying it out.

Using a a laptop and a mobile phone FrontlineSMS allows users to send and receive text messages with large groups of people. It can be used in a number of ways including disaster relief coordination, field data collection, conducting public surveys, organizing protests and more.

Skydeck is a little like Mobile Me from Apple, except that for voice calls they keep a log of all calls (incoming and outgoing). Skydeck provides real time data for all the calls you make, and you can mark calls for follow-up, tag them, etc. The application here is for it to be used in sales or industries where you need to log calls for billing. You can easily go back and search for names, and it provides a better level of relationship management for phone calls. So it is like a mini-CRM around phone calls. There are some social aspects to the application, as it wil rank your contacts depending on how often you speak to people – so when you view your address book it will show your most common contacts at the top. They claim that they are providing a more powerful address book, which is a very common and important function on cell phones, yet at the moment most address books are simple lists of contacts.

The Skydeck presentation also talked a bit about data portability issues with cell phone carriers. The demo displayed how T-Mobile (and other providers) lock away your call usage data and don’t provide an easy way to access it and use it in other applications. Additionally, they covered how various US carriers have disabled SyncML on phones, to prevent users from being able to extract and use their call data in different ways. Skydeck looks like a very interesting for those who use their phone for phone calls frequently as part of their business.

Glancing Pad is an effort to create a new human input method for mobile devices that replaces keyboards and works better than other alternative methods. The goals of the project are to not require sequential entry, a single-handed method and one that is easy to use and efficient. The Glancing Pad is a touch-pad style decide where through a series of finger movements and touches a letter can be entered.

The input method seems interesting, and similar to gestures that are available on current track-pads, except that the gestures and movements on a Glancing Pad are actually used to enter text (although one letter at a time). It will be difficult for users to train themselves in using this form of input pad, and it isn’t clear how this technology will be made available. We didn’t get a chance to see a live demo today, but it is an idea that does have some potential. 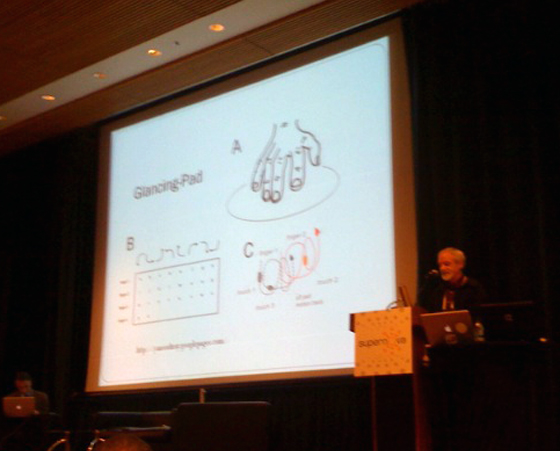 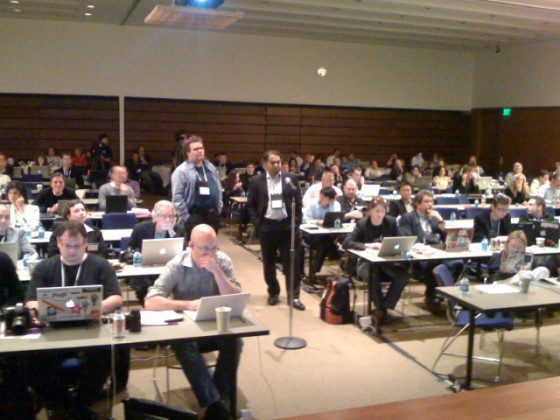