Even if they could, few people have the time to write a book. But what if they could Twitter one? For all those aspiring novelists out there, Quillpill might be the app to get them started.

Twitter clones have been cropping up all over the web in recent months with most of them replicating the “What are you doing?” concept in one way or the other.

Quillpill takes a totally different approach by wanting to know what stories you would like to tell. The site is primarily aimed at aspiring authors and readers of fiction. Quillpill is currently in private beta but available to the first 500 Techcrunch readers to sign up by sending an e-mail to techcrunch[at]quillpill[dot]com.

In order to compose a so-called book, users first choose a title and then submit posts with a maximum of 140 characters. Entries belonging together are displayed one below the other in a thread-like structure. Authors are able to create any kind of text-based content over time, including diaries, short stories, poems or even novels. Here is an excerpt from one called Saijo City Notebook by Eric Rice:

I remember reading in school about the controversy about broadcasting
public executions– a quaint and kitsch idea, considering the failure.

Televised executions came and went, as fads do, because the interest
wasn’t there. The ratings sucked. In otherwords, death was canceled.

Why are entries limited to 140 characters? The answer is simple: Founders Derek Maune and Elissa Rose have their eyes on the mobile web. The Twitter-like approach makes it possible even for owners of low-end mobile devices to blog stories wherever they want, regardless if a PC is around or not. In addition to the regular web site, Quillpill is available in an optimized mobile and iPhone version (“ipill”). The founders claim the service can also be used on video game consoles such as the Nintendo Wii, the DS or the Sony PSP.

Quillpill does a lot of things right. The site’s most superficial selling point is a strangely futuristic, yet beautiful design. The threading mechanism is straightforward, allowing for an easy read for people who are often on the road. The minimalist interface lets users create books very easily. As of now, there isn’t even a help section on the site, and it’s not really needed.

With all essentials covered and no major competing service suited to serial fiction around, the question is if Quillpill’s underlying concept will actually work. It remains to be seen whether writers will embrace the concept of composing texts one thought at a time, on small keyboards and mini screens. At least as important, a critical mass of readers must be ready for “cellular storytelling” in order for Quillpill to become a scalable business. 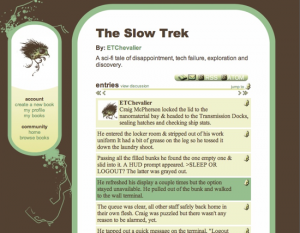 Japanese readers began saying yes to mobile publishing quite a while ago. Books written on cell phones are selling hundreds of thousands of copies in Japan. The founders say this phenomenon actually triggered the development of Quillpill. Consequently, the site will be released almost simultaneously in the US and Japan (as “Kyupi”). Future enhancements such as exporting content to different formats or a reward system for popular stories are planned to be implemented into both versions at the same time. Tokyo-based web consultancy Genkii is currently in the process of localizing the service into Japanese.

As of now, using Quillpill is completely free, but a paid subscription system is planned. Readers will also be able to purchase Quillpill books as ebooks or hard copies through the site itself or via print-on-demand services. Just like Twitter Japan, the Japanese version will be additionally monetized with display ads.

Quillpill was founded by Kansas-based Synthetic Entertainment in January 2008 and has been self-funded, costing about $30,000 so far.