Weebly, the WYSIWYG website designer, has introduced integration with Google’s AdSense API that will allow its users to easily monetize their pages. The site is also introducing new ‘Pro’ accounts, which will give paying members access to increased privacy and other features.

After selecting a desired ad size, users can place their AdSense widget by simply dragging onto their page in the Weebly editor. From there they can modify its appearance without having to muck with CSS or HTML. The site has also eliminated a few steps in the AdSense application process, but it hasn’t been able to do away with it entirely (users will still eventually have to enter their contact and required financial information, but Weebly won’t make you do it immediately). Users will split revenues from their site 50/50 with Weebly. 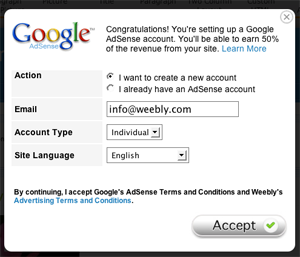 Weebly’s new Pro accounts introduce new features like embedded audio, increase file size limits, and the ability to customize or remove the Weebly footer. A year costs around $60, while users who sign up for two years will get a discount.

Weebly’s AdSense integration is sure to be a hit with people looking to quickly monetize their sites with as little hassle as possible (though Weebly might have to educate some of them on what AdSense is). Some more tech-savvy users might balk at the prospect of having 50% of their revenues paid to their hosting site, but Weebly isn’t really made for this kind of user in the first place. The Y Combinator-funded site has seen explosive growth over the last few months, and has seen its usage double in size since February, from 300,000 to over 600,000 users (you can see a graph below).

There are a number of other players in the WSIWYG page creation space, including Jimdo and Synthasite. For those that aren’t using page creation software, Triggit allows users to embed AdSense ads into any site using a line of JavaScript. 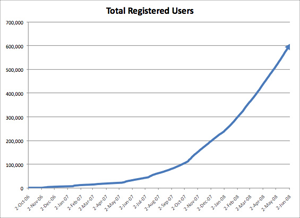