Channel surfing has a bad rap, at least according to iLike co-founder Patrick Koppula. Koppula says that this time honored tradition of staring at the television and repeatedly hitting a button is actually a highly efficient means of content selection.

Today Koppula unveils his latest project, ffwd which is trying to take channel surfing to the web. ffwd behaves like a video recommendation site that mixes StumbleUpon, Last.fm, and Pandora. The site will begin taking applications for their beta today, though it won’t begin until later this summer. TechCrunch readers will get priority if they sign up here. Update:The promo link works now.

The service revolves around “channels” of video , which are essentially groups of individual videos that have been sorted by topic. Rather than present the user with a list of suggested videos at the end of each clip, ffwd simply plays the next one in the channel. If the user doesn’t like it, they can hit the ‘Next’ button, and a new clip will be played. 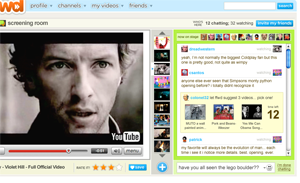 The system is deceptively simple. While the amount of user interaction required is minimal, ffwd is constantly monitoring which videos are skipped to help shape a user’s video channel. Videos are pulled from 42 video partners including sites with licensed content like Hulu, CBS, and Comedy Central (ffwd doesn’t license anything themselves, they syndicate it).

Besides its unconventional video selection process, ffwd has a number of other features that differentiate it from the likes of YouTube. The movie viewer will include a group chat function that lets users chat as they watch a stream of videos simultaneously (only twelve people can chat at a time, but anyone can spectate). ffwd is also developing UIs for a number of other devices. They plan to introduce support for the Wii first, and we can expect subsequent offerings on the iPhone and Android in the near future.

ffwd’s success is going to lie entirely on its ability to generate accurate channels – users that have to click ‘next’ too many times are liable to leave the site for good. Group video viewing is a nice touch, but it’s hardly unique (we’ve seen similar offerings from Userplane, Videophlow, and SmallWorld in the past month). And recommended video channels can also be found on a number of other sites, such as Magnify.