Imagine, for a moment, that Verizon were to think like Google or Amazon. It could give you access to your entire call history, every phone call you have sent or received, not just your last 10 phone calls. It might build an address book for you based on everyone you had ever talked to, with top results for the numbers you call most often.

And what if this phone company opened up its databases to developers of software applications? We could soon see mash-ups of your call history with the address books from your personal computer, your telephone and your social network. Now imagine a user community turned loose to annotate that data.

Little did O’Reilly know when he wrote this that a then-stealth startup called Skydeck was figuring out a way to do just that. Skydeck launched in private beta last March with a very basic service that marries your address book to your cell phone bill so you can see your real social network based on who you call the most. Up until now, people in the private beta could see their cell phone social network, but that was it. They couldn’t connect with anyone else using the service.

But starting today, members can opt in to connect their social networks with other friends who are also using Skydeck. What makes this interesting is that they can see the strength of their connections to each friend, as well as how strongly connected their friends are to other people. Skydeck measures the strength of a relationship based on the frequency and volume of calls between two people, how recent the calls were, and whether the calls were reciprocal or one-sided. Skydeck rolls up all of this data and represents the overall strength of a relationship as rising signal bars.

Now, there aren’t that many people using Skydeck yet because it is still in a closed beta. (We have 700 more invites for readers who apply here and mention “TechCrunch.”) But that’s not stopping Skydeck CEO Jason Devitt from opening up APIs to the Skydeck service so that other Web developers can tap into this new source of social data.

Exactly what kinds of apps will Skydeck’s APIs make possible? I asked Devitt, and he came up with the following, which are not half-bad (all are hypothetical, but technically possible):

1. You could write a plugin for Outlook or use Gmail’s API to display the last time you spoke to someone [on the phone] when you bring up an email from them.

2. Or you could go further and create an app showing in one place the history of your email, IM, Skype, and cell phone conversations with all your contacts (the cell phone is the missing piece – all the other data is already accessible).

3. You could write an app displaying every call longer than one minute in iCal at the date and time it took place, so that [a record of] all your calls appear in the same place as your in-person meetings.

4. 37Signals could add a note to the Highrise page for every call you make to a contact tagged “Business” in Skydeck.

5. RescueTime could display all the hours you spend on the phone alongside the applications you use and the web sites you visit.

6. FreshBooks could break out calls with clients on invoices for their customers.

7. LinkedIn could use ranking data to show which of the five people that we both know is best placed to introduce you to me.

8. You could write an app to bring all this data back to your smartphone. We will target some phones ourselves, but we can’t address every platform and we won’t stop anyone from trying.

9. You could write an app showing which of your Facebook friends you text [or call] most often. (You’d have to match on name because Facebook doesn’t disclose email addresses etc., but that’s not so hard.) Or use our measure of reciprocity to poke the friends that never call you back.

Integration with Salesforce is another obvious one. What apps would you build, or want to use, that ties into your cell-phone social network? 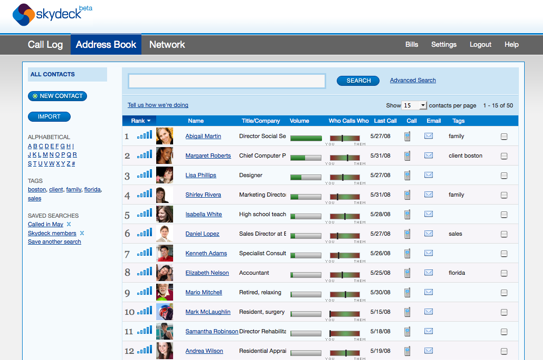 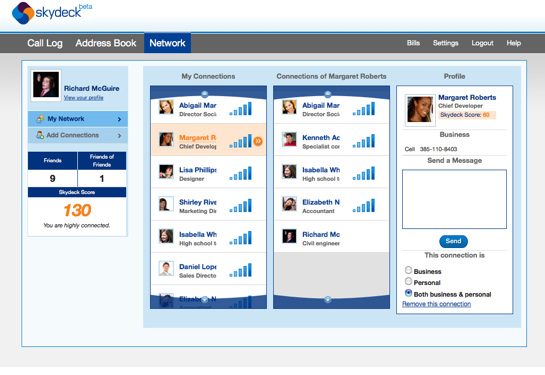