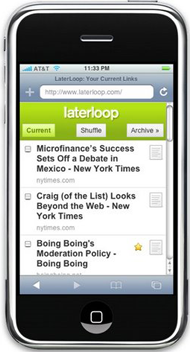 LaterLoop’s core functionality is very similar to Instapaper, which we reviewed last January. After adding either a Firefox extension or a Bookmarket to their browser, users can click “Save For Later” whenever they come across an interesting site that they don’t have time to read. These pages are saved in a list of temporary bookmarks on LaterLoop’s site, which can be accessed at a later date from a normal browser or from a mobile device (the site currently supports Blackberries, Nokia smartphones, and iPhones).

The site has also just implemented a download function that allows users to save all of their bookmarked sites into a .zip file. This will be handy for people on the go looking to catch up on their reading during a flight. Unfortunately this doesn’t work on the iPhone yet, though we can probably expect to see something once Apple’s official application store launches.

LaterLoop isn’t exactly a novel application – similar functionality can be found from toread, Firefox’s Read it Later extension, PhoneFavs, and a number of others. But it has very intuitive interface, and Google’s endorsement of the app at their I/O conference speaks volumes.

LaterLoop is the latest offering from developer Gregor Hochmuth, whose other ventures include FlickrStorm and Mento.