Oh, Apple. I originally brushed off your iPhone for its lack of (legitimately) addable applications, and now you’re the only ones with the right idea in mind. 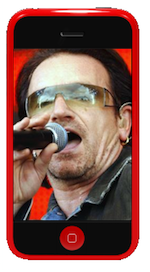 Goldman Sachs analyst David Bailey expects Apple’s iPhone App Store, which should be coming sometime near the end of June on the back of the iPhone 2.0 software, to play a huge part in tripling the iPhone userbase to 30 million users by the end of 2010.

That’s not too crazy of a prediction, by any means. With the iPhone userbase already on its way to an estimated 9 million users by the end of 2008, and the 3G version imminent, it’s definitely doable. Factor in the enterprise features also coming in the 2.0 software, and the prediction might actually end up a bit on the low end.

Of course, by 2010, we’ll be on the 5th version of the iPhone, which will be offered in black/red and come preloaded with Bono wallpapers.