Image search is a hard problem. That is especially true when you are searching with no information other than the image itself (no tags, titles, or descriptions, just the photo). I’ve seen my fair share of image search demos, and they usually promise far more than they deliver. But last week, I finally saw one that deserves the name. It is called TinEye. The first 500 readers to send an email to techcrunch [at] tineye [dot] com will be pre-approved for the private beta. 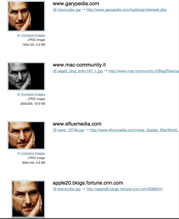 You can upload any image file to TinEye or paste in the URL of an image in the search box. It then will scour the Web and find sites that contain the same image (see video). As long as the image has been indexed by TinEye, it can be found. For instance, it identified 39 sites that use the famous Steve Jobs image at left and in the screen shot below. It only launched earlier this month, but so far TinEye has indexed close to 750 million images on the Web, and should reach one billion sometime next month. Google, in comparison, is estimated to have indexed between 4 to 6 billion images. (Polar Rose, on the other hand, has only identified 21.5 million images on the Web, although that is more facial recognition than exact image identification).

TinEye works even if an image has been modified, cropped, made into black and white, or photoshopped. The image-search algorithms behind it were developed by a company in Toronto called Idée, which already offers a service to news photo agencies such as the Associated Press, Agence France-Presse, and Getty Images to automatically identify whenever one of their photos is used in a newspaper or magazine. Idée digitally scans thousands of print publications for this purpose (before, it was actually someone’s job to leaf through every page looking for the photos). Digg also uses the technology to make sure no duplicate images are submitted to its image section, and Adobe licenses the technology in Photoshop for the “find by Visual Similarity” feature.

At this point TinEye still is not much more than a technology demonstration. After all, most people search for images by putting in a keyword that describes it, not by showing it the image they want. (If they already have it or know where it is, why do they need to look for it?). Its main appeal right now is for photographers and photo agencies who want to find out where their photos are being used on the Web. (Think Attributor).

But you can imagine other ways the technology could be applied. If Idée can figure out a way to seed the images it finds with tags, or combine its approach with a text-based index, it could create an image search engine that is really good at finding exactly what you are looking for. Unfortunately, it is not good at finding images that are similar to each other (see update below), and that could limit its potential.

Update: I was mistaken about that last bit. TinEye canot do facial recognition or find similar images, it can only find the exact same image. So it wouldn’t work as a way to auto-tag pictures in iPhoto. I believed that it could due to a miscommunication with Idée’s CEO (my fault). The original title of this post was “Mr. Jobs, Here’s An Idée For You: Put TinEye Image Search Into iPhoto (500 Invites).” I got a little carried away there, but I still want that capability in iPhoto. TinEye is just not the answer. 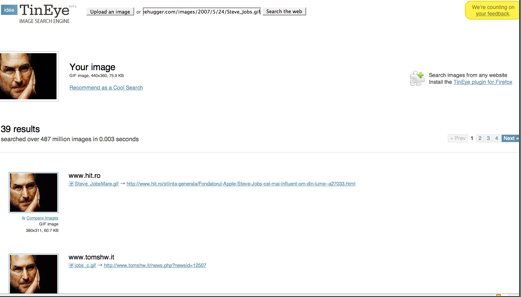