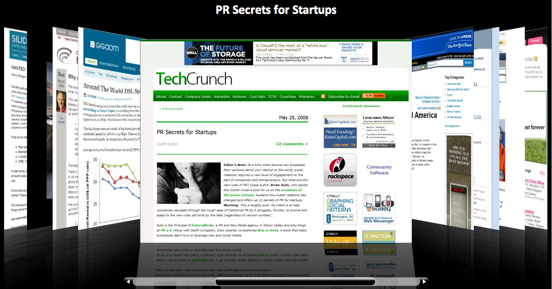 Does Cover Flow work for browsing the Web? Increasingly, I’ve been seeing Flash-based Websites adopt the visual metaphor of Apple’s iTunes Cover Flow as a navigational tool to quickly flip through Web pages (instead of album covers). You can see that in new search engines like SearchMe, and in a news filter that just launched this weekend called Flowww. (Apparently, we are now entering the era of triple-letter misspellings for Websites because all the double-letter misspellings are taken). Flowww lets you flip through about 24 current pages culled from the top 100 tech blogs and news aggregation sites like Digg and Techmeme.

Right now, you will find some of the same stories that you will find on Techmeme and elsewhere, including posts from TechCrunch, GigaOm, O’Reilly Radar, Silicon Alley Insider, Datawocky, TorrentFreak, The New York Times, and Yahoo News. It’s 98 percent tech news, but the site throws in some pop culture stuff and a couple cool photos from Flickr. Eventually, you’ll be able to add your own feeds, or use it to read one particluar source (here’s what it would look like for TechCrunch).

The idea is that many people are having a hard time keeping up with all the news coming at them from their RSS readers, Twitter, FriendFeed, Facebook, and everywhere else. So Flowww tries to reduce the noise and present just the most important stuff. It looks at the top tech blogs and the big stories on the news aggregation sites and puts it through a data mining and predictive analysis engine powered by SPSS Clementine. It also takes into account social votes on sites like Digg, Tweets, highly bookmarked stories, and evaluates anything tagged “flowww” on del.icio.us, Flickr, or any other service it monitors. There will also be a way to e-mail in stories for evaluation

Flowww was created by David Zotter, a developer in Connecticut. He won’t really explain what his organizing principle is other than to say it is a “mix between crowd sourcing and predictive analytics” and that “there is large amount of text processing happening to trim down the top news.” He also claims “it should be impossible for a dominant minority from a single source to game the overall rankings,” but refuses to give any details on exactly how it is supposed to do that. (It seems that simply getting lots of people to tag photos and stories with the word “flowww” would be one way to try to game the system).

Ultimately, people will have to decide for themselves if the news presented in Flowww does a better job than other filters. For me, at least, it doesn’t. There are certainly posts and articles there that I would want to read, but many of them are the same ones I can find on TechMeme, Digg, or simply looking at my RSS reader. And there are some I could care less about, like an EW story about American Idol David Cook. I’m not sure why I should trust Flowww to make my reading selections for me, and Zotter doesn’t care to try to explain his approach.

The other issue I have is that, while the site is pretty, the Cover Flow metaphor just doesn’t work for me as a navigational tool. It is too slow and it forces you to look at the pre-selected sites in the order that the algorithm (or Zotter) picks them. If you want to read the middle story, you have to flip through all the previous ones to get to it. I’d rather pick my own stories from a list of headlines, thank you very much.

What do readers think? Would you use it?