Keeping up with your friends on social networks is hard work (enough so that many of us spend hours at it every week). Wouldn’t you like to make a few bucks for your trouble?

Meet UrTurn, a new startup that hopes to create a unified virtual currency across all major social networks. The site has just launched in a public beta, and is currently available as a Facebook app (with MySpace coming shortly). The first 250 TechCrunch readers who sign up using the code ERAS4 here will receive 500 bonus points.

In some respects UrTurn acts like a virtual pyramid scheme – users can get points by inviting their friends (and even more points if those friends add the application). But users can also get points by performing everyday actions. These earn fewer points, but they add up – if you were to add two friends, five photos, and two status messages on Facebook every day for a year, you’d have enough points for an iPod Touch.

Users spend their points at UrTurn’s virtual store, where they they can buy gift cards or digital gadgets (we can expect the store to grow as the site expands). Alternatively, users can put their points up in a marketplace and sell them for cash. You’re not going to get rich this way, but getting paid to surf Facebook is certainly an appealing prospect. In an effort to reduce gaming of the system, the site requires users to tie their accounts to an active PayPal account 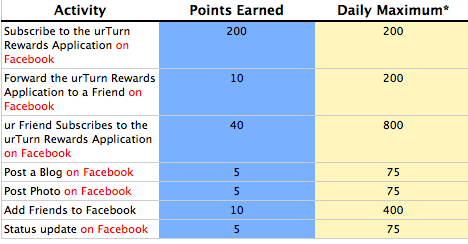 At this point UrTurn is exploring a number of ways to monetize their application. Besides standard advertising, UrTurn is considering placing a tax on every marketplace transaction. The site is also planning to release an API that will let them integrate and have a rev-share with other applications, allowing them to distribute points based on usage of third party apps (the site will launch a pilot program with five appssavvy apps next month).

Virtual currencies have had a long history of failure – in the late 90’s Beenz.com unsuccessfully tried to establish a worldwide currency that could rival the dollar and the pound (that company closed its doors in 2001). UrTurn is going to have to fend off countless users trying to abuse the system, and they may have a tough time monetizing their app when so little effort is required on the user’s part. That said, social networks are craving an effective micropayment system, and virtual currencies may be the answer. Acebucks, which we covered last fall, is another company that is trying to establish itself as a unified currency for social networks.