The idea of leaving sticky notes on the Web for others to find has been tried many times, but has never really taken off. Third Voice dotbombed with the idea in the late 1990s, then Activeweave tried it with Stickis (only to abandon the idea in favor for an app called BlogRovr, which was recently acquired by BuzzLogic). The missing element was that there was never a social way to share the Web pages and people’s comments about them instantly.

A startup out of Florida called Slingpage thinks it has figured out a better approach. It lets you “sling” Web pages to your friends with one click, chat about them, and annotate them with sticky notes as well. It is just coming out of stealth mode and TechCrunch has private beta invites for the first 500 readers to sign up here. (Warning: only PC users with Internet Explorer 6 or higher need apply). 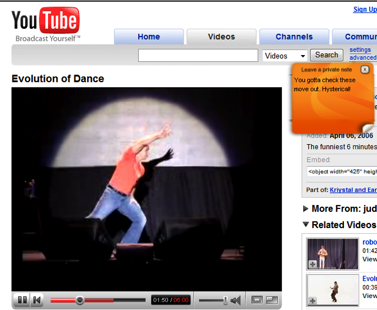 Being able to leave a virtual sticky note on a Webpage is kind of pointless unless you can tell people it is there to go and admire. Slinpage joins the most recent band of Web annotation startups, including Diigo and Fleck, that have added sharing and “friendcasting” features to their services. With Slingpage, you can send a Webpage to anyone else in your contact list immediately and even start a chat about it.

Slingpage is an extension for Internet Explorer. (Firefox is coming soon). You can import your contacts from Outllook, Gmail, Facebook, or Yahoo. And, of course, you can also build up your contact list one name at a time. You can only sling Webpages with other people who have also installed the application. The company is working on a Sling-to-email feature to allow the application to spread more virally. And if you Sling a page to a Facebook contact, a message appears in their feed. You can also create a public Slingcast, which is a feed of URLs you collect around a certain topic.

“Every sling becomes a vote, if you will,” says CEO Peter Weinberg, who previously was a technology banker at WIT Soundview (before Schwab acquired it). In that sense, Slingpage is also a little bit like StumbleUpon or del.icio.us. Members save and share URLs, except they do it immediately. When you “sling” a page, a little window pops open in the bottom right of the recipient’s screen. Every page you sling is saved and is a lot easier to find than links you send through e-mail or IM. The startup is based in Estero, Florida and has raised $2.2 million in angel funding. The service will be ad-supported.

I’m still not convinced, though, that it is a better solution than StumbleUpon or del.icio.us for sharing and managing Web pages. The lack of Firefox support means that it is ignoring a group of Web surfers most likely to experiment with new apps. It also needs to develop a widget strategy so that users can distribute their Slingcasts anywhere on the Web, and it needs a better mechanism for Slingcast subscribers to respond with their own notes on a page they want to discuss (something the company is working on). 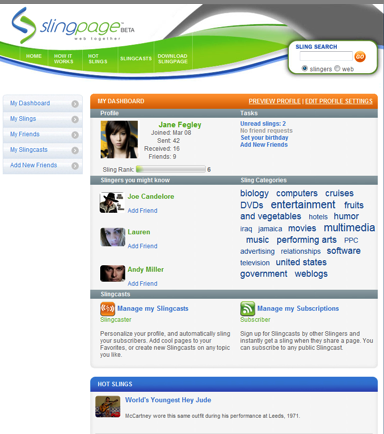 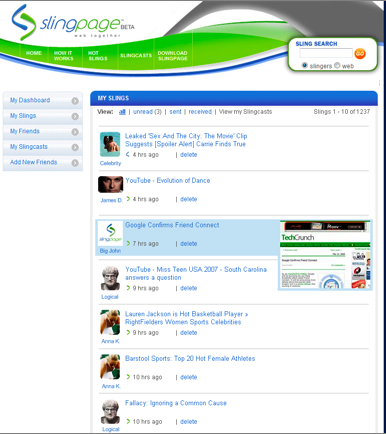 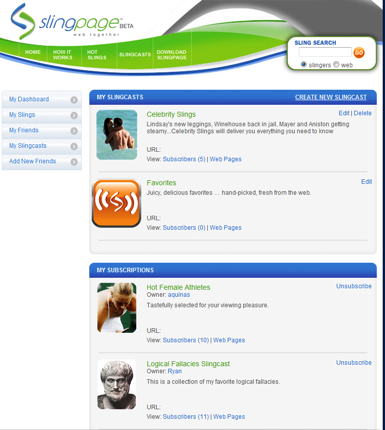