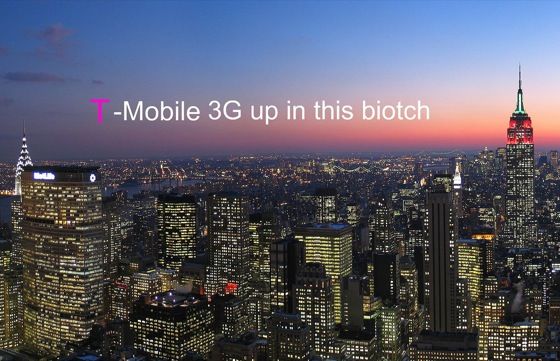 Not like we didn’t already know, but now it’s official. NYC has first dibs on T-Mobile’s UMTS/HSDPA network. HSDPA?! Too bad we’ll have to wait until later this year to test it out, but those of you with a 3G T-Mobile device can reap the benefits of UMTS. Oh wait, I’m pretty sure all those 3G devices aren’t data-centric.

NEW YORK and BELLEVUE, Wash. – May 5, 2008– T-Mobile USA, Inc. today announced that the company has taken the first commercial step in the rollout of its third-generation (3G) wireless network by launching its UMTS/HSDPA network in New York City. T-Mobile plans to continue the rollout of its 3G network across major metropolitan markets through the year. By year’s end, T-Mobile expects its high-speed data network will be available in those cities where a majority of its subscribers currently use data services.

“The launch of our 3G network comes at a time when 3G phones and services are more affordable, capable and appealing to our consumer marketplace than ever before,” said Cole Brodman, chief development officer, T-Mobile USA. “We benefit not only from the economic scale of 3G, but also from the extensive commercial experience of 3G in our European markets. Today, T-Mobile USA customers already have among the highest adoption of data and messaging services in the industry. Through our 3G network, we look forward to delivering a rich portfolio of new and meaningful services to enrich our customers’ lives.”

T-Mobile’s 3G network supports voice and data services consistent with available service and handset offerings. The company today offers multiple phones that are able to operate on the UMTS network. The phones are designed to automatically connect to the best available network (3G or GSM/GPRS/EDGE) to provide the great call quality and rich communication services customers expect from T-Mobile.

Customers using a 3G-capable handset from T-Mobile will also experience faster data speeds when accessing the Web, or downloading content from the T-Mobile t-zones content portal, for example.

In the coming months, T-Mobile plans to offer its first HSDPA device, along with new and compelling data-centric, all-in-one devices that help make the most of T-Mobile’s high-speed data network.

The launch of the 3G network also enables T-Mobile to accommodate and serve more customers more efficiently through the use of its AWS spectrum, effectively doubling T-Mobile USA’s spectrum position, and laying the foundation for the company’s future growth. T-Mobile and the U.S. government, namely the Department of Defense and the Department of Justice, continue to work closely and effectively together to make available AWS spectrum that will give consumers access to the 3G network.

As the 3G service rolls out in targeted major markets, T-Mobile will continue to build upon its
T-Mobile® HotSpot Wi-Fi network — its wireless high-speed Internet offering that launched in 2003 — and its nationwide voice and data network, to empower customers to effortlessly stay connected using the best available network.