There are plenty of feed readers on Facebook. None are particularly popular. News apps, in general, don’t do well on Facebook (it is not even a major app category). But Ankesh Kumar, the CEO of Grouptivity, thinks he has a news app that taps into the viral hooks on Facebook. It is called Social News and it just launched (although, to make things confusing, there is another Digg-like app by the same name). Apps for MySpace and Hi5 will be next.

Social News, like Grouptivity, is a combination feed reader/social bookmarking service. (Grouptivity raised a $2 million angel round in May, 2006, mostly from Kumar, who previously sold two staffing startups to Kronos and Monster, respectively). Rather than responding to an explicit thumbs-up or thumbs-down, news headlines get voted up every time they are bookmarked, e-mailed, or shared on your News Feed in Facebook. Any kind of sharing is counted as a vote, and when you e-mail an article through the app it automatically gets saved as a bookmark.

The app is pre-populated with news feeds from the BBC, CNN, the New York Times, the Wall Street Journal, and other sources (including TechCrunch). Readers can delete or add and blog or news feed they like, and any action taken (bookmarking, e-mailing, sharing) shows up in your Facebook News feed and is shown to all of your friends on Facebook. The problem, for many users, is that it does not save the bookmarks to Digg or del.icio.us, but rather to Grouptivity.

One way Kumar hopes to gain users is by recruiting readers directly from partner blogs and news sites. He is basically offering a way to turn any news feed into a Facebook app. For instance, he’s already struck deals with Hearst to add this functionality to the sites for its regional papers. And he has created a plug-in for WordPress that creates a “share” button so that feed can be read through Social News on Facebook. For new users who come in through publishers, only that Website’s feed will be appear on the app at first—although others can be added.

Blogs that want to create a Facebook presence that goes beyond merely republishing their feeds might find this appealing. It is an implicit recommendation system that shows someone’s entire Facebook network what news stories they are bookmarking and sharing. But will this be enough to get people to start using it? 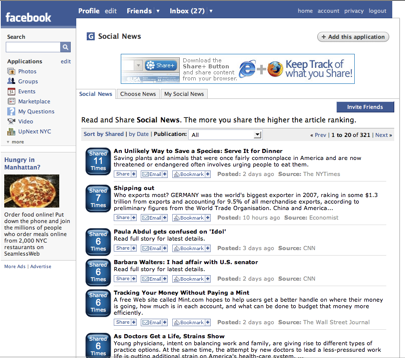