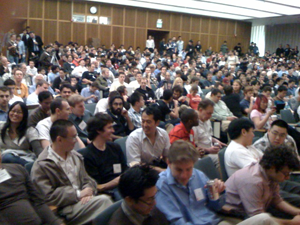 Today marked the fourth year of Y Combinator’s startup school, and judging by the overflowing auditorium that persisted throughout the event, it was a runaway success. A crowd of over 650 developers, writers, and entrepreneurs packed Stanford’s Kresge Auditorium for a chance to pick the minds of tech-industry greats. The annual event gives members of the startup community, particularly technically-minded ‘hackers’, a chance to learn and ask questions about venture capital, IP law, and other aspects of the startup process.

-David Hansson’s presentation, which was easily the most entertaining of the afternoon. Hansson, who created Ruby on Rails and is a partner at 37signals, espoused a pay-for-use model that stands in stark contrast to the free services that seem to define Web 2.0. As he mentioned, this model hasn’t worked for everyone…

-Jeff Bezos dodging a question on Google App Engine, explaining that his company “doesn’t like to talk about other companies.”

-Paul Buchheit’s joking admission that he spent his last few months at Google “basically doing nothing.”

A video of the entire event can be found at Justin.tv.

The slides plus video can also be found over at Omnisio.