In the age of social media—when everybody is busy creating personal broadcasts on Facebook, MySpace, YouTube, Twitter, Flickr, blogs, Justin.tv, you name it—what happens to the notion of the broadcast? I am not talking about TV or radio, where traditional broadcasts still work the way they always have. I am talking about broadcasting an event or a message on the Web. Does the notion of broadcasting even make sense anymore in a narrowcasting world where anybody can read, watch or listen to any piece of information on their own schedule? And if it does make sense, how do you pull together the personal media of the Web into a coherent experience rather than produce something in a top-down fashion to be released upon a no-longer-passive audience?

These are the kinds of questions that Tola Oguntoyinbo wrestles with all the time. Tola is the CEO and co-founder of Sonecast, a bare-bones social media marketing startup in Chapel Hill, North Carolina that is credit-card funded. His sonecasts (social network broadcasts) pull social media from practically any source into a dedicated, branded site. The closest thing to it is perhaps a combination of Meebo Rooms and SplashCast (which just raised $4 million earlier this week). Sonecasts tend to work better around a live event, like this one for a DJ Spooky concert or this one for the Crunchies that he ginned up after the fact (see also screen shot below). 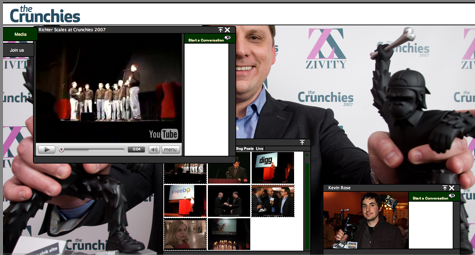 In the Crunchies sonecast, there is a floating frame on the page with little tabs that bring up clickable thumbnails of Flickr photos, YouTube videos, and blog posts from the event. There is also a live tab that would have shown the live video feed from Mogulus during the awards ceremony. Each photo, video, or blog headline you click on opens up a new window and lets you comment on each item. The DJ Spooky one broadcast live video from a concert at Duke University, which is now archived and still viewable. Other tabs include photos from Flickr and Facebook, DJ Spooky videos, music, and posts from MySpace, a podcast interview from the event, and a fully-featured music widget with complete streaming songs, music videos and links to posts about the artist on music blogs.

Please note that these are demo sites, they are a little slow to load, and probably cannot handle a ton of traffic. (The service is still in a closed alpha). But the approach taken with the user interface is instructive. It is both economical and all-inclusive at the same time. And while it is tapping into social media for marketing purposes, it is not trying to create a corporatized social network along the lines of Mzinga or Networked Insights.

“We’re really about leveraging existing content networks,” says Tola. He makes a distinction between “ego-centric” social networks and “object-centric” ones where the “objects” people organize around are photos, videos, and links. Ego-centric social networks, in contrast, like Facebook or MySpace, are organized around user profiles. They are about “people surfing versus content surfing,” he says.

The sonecasts can combine professionally-produced video or other broadcast material with relevant audience-produced material about the same event. Flickr photo streams, Twitters and YouTube videos can all easily be pulled into a sonecast. The idea is to create social activity around the events. Sonecasts can also be created around brands or products. For instance, a sonecast for the Pleo toy dinosaur (click on the middle dummied-up screen shot below) could include Flickr photos from enthusiasts, posts from the Pleo blog, or videos of the Pleo being hacked.

A Sonecast is a place to collect the lifestream of a product or a brand, if you will, just as people are beginning to gather their own lifestreams from across the Web into services like FriendFeed. Except there is also the broadcasting component—that initial, compelling content that will draw people to the Sonecast in the first place. That is the biggest challenge here: Getting people to the Sonecasts in the first place and making sure there is something there for them to do.

A good place to start would be syndicating its widgets across the Web to draw people back into the richer experience of each full site. (SplashCast, in contrast, only does widgets. Having both widgets and a destination page could be an advantage). It also needs to do a better job with showing who else is in a Sonecast and what they are doing there. But it does open your eyes to the possibilities of broadcasting in a totally different way.