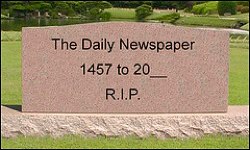 Survey results released by We Media/Zogby earlier this week show that more people turn to the internet for news than any other source.

The survey found that nearly half of all people in the United States (48%) cite the internet as their primary source of news and information, compared to 29% for television, 11% for radio, and a dismal 10% for newspapers. There was an age difference at the lower end, with only 7% of people aged 18-29 getting news from newspapers, vs 17% of those 65 and older.

67% of Americans believe traditional journalism is out of touch with what they want from their news.

It should be noted that the survey did not break down the types of news sites respondents were reading online, so by no means do the results equate with the death of the mainstream media (ie they could well be reading mainstream media sites online). The figures do suggest that some forms of offline news reporting may well be headed to the Deadpool over the next 5-10 years, at least in the United States. It will be a long and slow death, but as newspapers and radio slump into lower and lower single figures, it’s a given that the presence of both will shrink; we’re already seeing massive across the board downsizing now in print media.