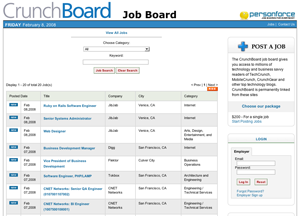 We’re pleased to announce that we have launched a new version of CrunchBoard powered by Personforce.

In honor of our new partner Personforce, we are offering discounts on bulk listing purchases over the next 30 days. Please email jobboard@beta.techcrunch.com for additional details.

We’d also like to thank all of the many job board providers who reached out to us following the announcement that Edgeio had been sold to Looksmart. Although there were many qualified and eager candidates, we were attracted to the dedicated sales effort that Personforce will add to our own efforts.

Personforce powers VentureBeat as well as the boards at a number of leading colleges and universities (Stanford, Harvard, Princeton, Yale, and more). They also moved expeditiously to get a new board up and running within 48 hours of Looksmart unexpectedly pulling the plug on our old board (nice one, guys).

Thanks for your patience as we made this transition. And look for more exciting developments between Personforce and CrunchBoard in the coming weeks, including new boards for TechCrunch UK and TechCrunch France.