With 24 US States holding presidential primaries tomorrow for Super Tuesday, we took a look at which candidates are getting the most traffic online, and the results (at least with the GOP) were surprising.

For previous TechCrunch coverage, check out the TechCrunch Tech President endorsements here, and full coverage of where each candidate stands on tech issues here. 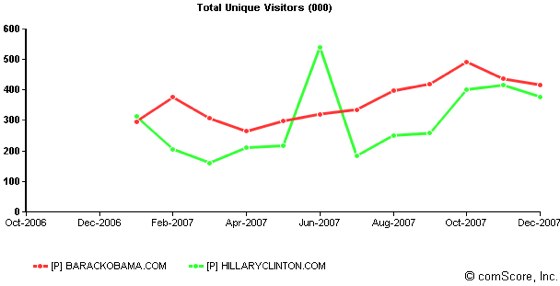 No great surprise here and the gap in traffic between Obama and Clinton closely reflects the poll differences between the two coming into Super Tuesday. Obama’s site was the first to offer a full social network for supporters (see our initial review here) and it’s well worth a look even if you’re not interested in politics, or live outside of the United States. Clinton has a polished site, but it doesn’t go nearly as far as Obama’s does….and also currently has a featured picture of Hillary’s back, not a nice look when you’re trying to connect with voters. 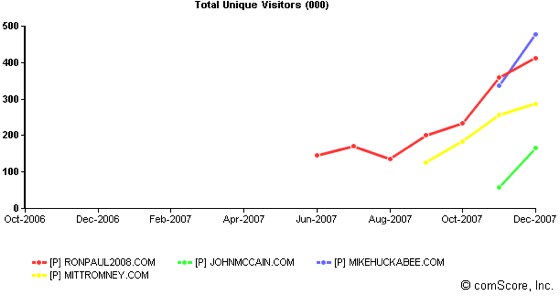 This was a surprise result, because with Ron Paul supporters seemingly everywhere online I would have thought Paul would have had the most trafficked website. Perhaps the distributed nature of Paul’s campaign means that supporters aren’t necessarily drawn to his site. Huckabee leads as at the end of December (the last month figures are available) and it cant be due to the site itself, because it’s awful, at least under Firefox on a Mac. Distributed content can be found via small button in the bottom right hand corner, but in terms of stickiness it’s just not there. Romney and McCain’s websites aren’t brilliant, but they at least provide a range of options for supporters. Paul’s campaign site embraces the many different parts of the internet the campaign is using (see our review of Paul’s online strategy here.)