When Michael profiled the Gizmo Project in July 2005, he noted that it had more features than Skype, but lacked instant messaging. The one time Skype competitor has become the Jaiku to Twitter, having pretty much dropped off the radar as Skype was acquired by eBay and went on to become the leading desktop VOIP/ IM solution. 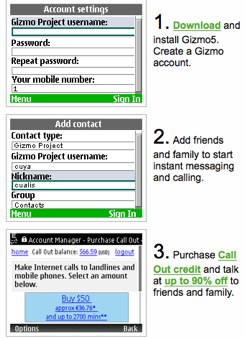 The open source SIPphone owned Gizmo has continued to be developed, and this week added MySpace IM support on top of support for MSN, Yahoo, AIM and Jabber (including Google Talk). Today’s Gizmo is more IM platform than predominantly VOIP platform, and it makes for a fairly decent product.

Gizmo offers an attractive feature set. On top of the wide IM support that makes it a competitor to Adium and Trillian, the VOIP side offers competitively priced calls to external numbers, as well as free calls to those using the SIPphone platform. Services such as file transfer are supported, although video calling is only supported between Gizmo users, and not with users on other services. Cross platform voice chat is supported however.

Notably Gizmo 5 can be installed on a range of mobile phones and run locally, complete with VOIP calling, a decent value add if you’re on an unlimited data plan with your mobile phone. Unfortunately there isn’t a version (site or download) for the iPhone yet so I was unable to test it.

Gizmo has long since lost the battle against Skype to become the dominant VOIP service, however if you’re looking for a fully featured mobile IM client that also offers cheap calls it might be worth a look again.