eDirectree was founded this past November by Raj Abhyanker, who also founded Fatdoor in late 2006 but left when that startup hired a new CEO. Whereas Fatdoor, once out of private beta, will help neighbors get to know each other online, eDirectree helps people who already know each other reunite and associate in different ways.

The network essentially takes the “groups” feature found in most social networks, adopts it as a central concept, and injects it with steroids. By default, group and member profiles on eDirectree are wikis that anyone can add and edit. If you want to set up a group (as I have for TechCrunch) you can add your friends even if they’re not eDirectree members yet. Enter their names and email addresses manually, or upload a group photo and draw boxes around their heads. With the latter method, each person’s mug will be cropped out of the photo automatically and used as an avatar for their new profile. 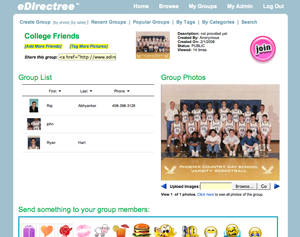 Once a group has been established, anyone within that group can edit both the group’s settings and the profiles of other members. This wiki functionality is reminiscent of the control Yahoo Mash users have over each others’ profiles by default. You can add your friends to other groups and change their profile information, as long as they haven’t locked things down.

eDirectree has clearly been designed with MySpace users in mind. The site will piggyback off that social network by encouraging users to embed group and profile badges on MySpace profiles that will direct traffic back to eDirectree (see our badge below). In a way, eDirectree serves as a super-feature for MySpace, although it can be used by itself and the embeds can also be placed in blogs. The site could have been created as a Facebook application (or MySpace application, once their platform finally launches) although it may have better luck with user adoption as an independent destination.

As a way to encourage user participation in the whole wiki theme of the site, eDirectree will be tracking users’ activity and rewarding them with points that can be redeemed for prizes like t-shirts, iPod nanos, and Wiis. The more users add their friends and set up groups, the more points and prizes they get. Let’s just hope they can control the gaming that will inevitably arise.