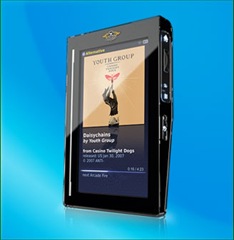 Lovers of Slacker Radio, prepare to shower me with petals of rare flowers, delicious food, and promises of sexual favors, for I bring news that the Slacker Portable, which has been delayed more times than Winehouse’s rehab visits, is finally set to ship tomorrow.

For those not in the know, the Slacker Portable is a device not unlike an iPod or Zune, but it uses local Wi-Fi to load songs into the device which are played for your, and you rate them, as you do on the Slacker website.

For those who like social networking mixed in with their music, this is the player for you, and you can thank me for the news later.

Slacker Portable Ships Tomorrow. What’s Next? [Laptop, whom we bested in Beer Pong at CES, just so’s ya know]