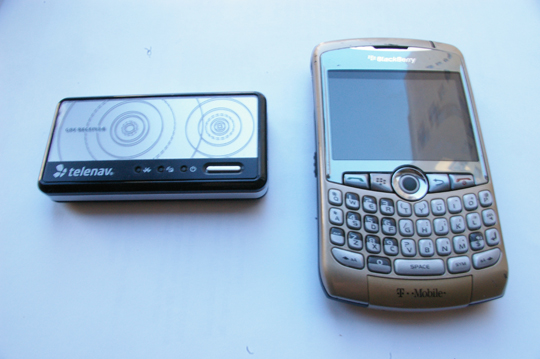 When I switched from the Sidekick Slide, I decided to stay with T-Mobile since I’m month-to-month with them rather than jumping to AT&T or Verizon or Sprint. So my BlackBerry Curve is sans GPS, but has Wi-Fi instead. It sort of evens out. Well, in the three weeks that I’ve been away I’ve done some driving and on a few occasions I forgot to bring my Helio Ocean, which meant I was without GPS. Sure, Google Maps is somewhat spot on, but there’s nothing like having GPS when you really need it.

So, I was super happy when I checked into the TC/GC office earlier today and found a bevy of packages waiting for me. It was like Christmas. The smallest package happened to be the coolest one of the bunch and it was Telenav’s GPS receiver. It’s a tiny little guy and has a rubberized back so you can throw it up on the dash of your car and not worry about it sliding around. This, too, will get put through its paces over the next week or so. Stay tuned.