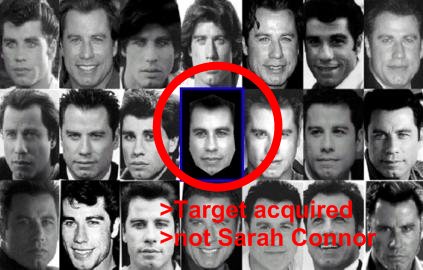 Or so they say. What they’re doing is using multiple pictures of the same terrorist/innocent civilian to create a sort of average face, which in this case looks like you mapped Travolta onto one of the guys in Quake. Wow, he really does look like a Quake guy there. They claim that this eliminates the confounding factors of beards, smiles, Groucho Marx glasses, and so on and creates an a sort of archetypical face that can be used to identify any number of variations. Sounds fishy, but it’s on the internet, so it must be true.

Actually, it’s in Science, so it’s at least peer reviewed.