They simply select the portion of the video they want by highlighting the desired section of an accompanying speech-to-text transcript. Then they can download the clip as a WMV or Flash file for republishing to their Websites, automatically distribute them across the Web through ClipSyndicate (Critical Media’s TV-to Web syndication platform), or transcode the video clips and send them to iTunes.

Syndicaster.TV is free to any broadcaster who is a partner in ClipSyndicate. “Bloomberg has been using it for four months, making 60 to 90 clips a day,” says Critical Media CEO Sean Morgan. The service is basically a combination of ClipSyndicate and his Critical Mention video-clipping service, which already captures TV signals from more than 600 TV Stations in North America and elsewhere and makes them viewable immediately on the Web. Now he is taking that video and making it instantly publishable to strengthen the position of ClipSyndicate.

Since all the video gets translated into text, the broadcasts from each station can be delivered as an RSS feed to station executives. Morgan is also looking into creating a Syndicaster offering for radio stations, which would capture just the audio and allow them to publish radio-show segments, along with full transcripts embedded as searchable meta data. 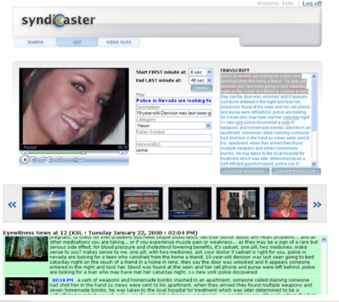