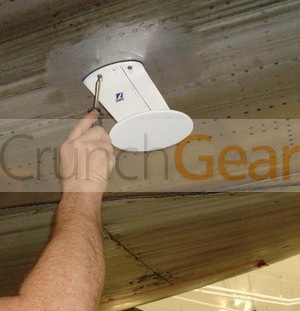 Aircell air-to-ground antenna being installed on the Boeing in KC.

You’ll essentially have your desktop experience on a plane sans VoIP, which hackers won’t be able to hack, but they can try hacking it except it can’t be hacked. Aircell will also provide complimentary access to AA.com, access to the WSJ Digest Edition, VPN compatibility and uninterrupted coverage across the US above 10,000 feet.

That’s all well and dandy, but how much does it cost? For domestic flights in the five to six hour range you can expect to pay $12.95. For shorter trips of about three hours you’ll be expected to ante up $9.95 and for those traveling on more than one occasion each day you’ll have a day pass for $12.95. Day pass pricing hasn’t been set, yet. There will also be monthly and annual subscriptions.

Aircell’s air-to-ground inflight Internet system for commercial aircraft uses three lightweight antennae installed on the outside of the aircraft. One antenna, the PCS/GPS antenna, is mounted on the top of the aircraft, and the other two antennas are mounted to the bottom of the aircraft. Customers access the broadband signal using their own Wi-Fi enabled devices, which communicate directly with wireless access points that are distributed evenly throughout the aircraft cabin ceiling. The signal will be transmitted through the 3mhz signal from air to ground using 92 cellular towers throughout the continental United States.