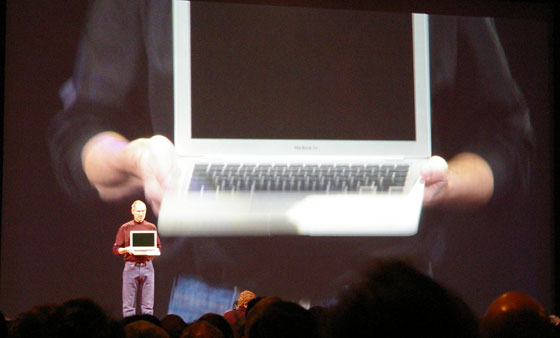 Unadulterated feed of the entire keynote. Thanks for tuning in.

Time Capsule
it’s a wireless backup applicance
it’s an airport extreme base station and a huge hard drive
802.11n
it’s a full 802.11n basestation AND backupstation
works with all the macs on your netowrk at the same time, wirelessly
there are 2 versions

each as a backup so he can find a lost file

hat’s what he wanted to share with us this morning.

Number two is about the iPhone

Great news for us

iphone equals palm, motorola, and nokia together in the first quarter
and the december numbers whould be even better
i believe it, iphones everywhere
now let’s talk about eh SDK

it’s out later, but today we’ve got some gtreat new features

Webclips: shortcuts to your favorite websites on the homescreen

he GPS zooms in like google earth
looks really cool
driving directions, all the stuff it has now, but with GPS
routing is pretty fast, assuming his iPhone is on WiFi
drop a pin anywhere, you can addit to your itenerary

ing to Google, they have really cool webapps that I love – steve
mesides “add a bookmark”, you can have “add a homescreen”
bam, it’s there witwipes for last/nextand iPhone’s pinching to zoom
those are just a few of the gestures you can do
in the control panel, you can set them all up teh other icons
no “booms” yet for those scoring at home
it doesn’t have to just be a website, though
it’s a VIEW of a website.
it’s where you’ve zoomed and panned
if you’re just on one favorite column of a 3 column page, it’s just the column you’ve added. Nice.

You can name them anything you want

touch an icon, they all wiggle, then you can move them around

so now you can arrange your icons onto up to 9 homescreens
any order you want
how do we do some of this stuff?

there’s no GPS in the iphone, but it has your location
we’re working with two companies for that
Google
and Skyhook Wireless
kyhook has driven cars around and tagged Wi-Fi hotspots
so it’s GPS via Wi-Fi (!?!?!)
google is doing the same thing triangulating cell towers

those two technologies together work great