Geelong, Australia based Tinfinger has launched in beta today with a user-generated “omnibus” of famous and well known people. The site combines user-authored encyclopedic profile pages of famous people, some social networking aspects, a revenue share model and aggregated news.

People in Tinfinger’s database are sorted via a top-down category structure and a flat tag structure with tags “being expressible as RDF triples (subject-predicate-object, as opposed to subject-object).” Wikipedia style the service offers stubs of 150 words on celebrities who do not yet have a full profile on the site, that can be edited and added to by TinFinger users.

Tinfinger’s “clustered news aggregation” offers “front pages” for 650 categories in a similar fashion to Google News but notably with data pulled by its own news and blog search engine. Tinfinger does not use links or semantic connections to cluster; just names, using a publicly available algorithm called tinscore.

On the social networking side, Tinfinger is using tech from PeopleAggregator to allow user interaction including groups for each category or user generated groups.

I spoke to Tinfinger CEO Paul Montgomery prior to launch; the site has taken over two years to get to this stage and aside from the social networking side it’s exclusively powered by their own code and engine. It’s a tough market, particularly with Google set to launch Knol later this year but Montgomery argues that the strength of Tinfinger is its narrow focus and says that Tinfinger will be to Who’s Who what Wikipedia was to the Encyclopedia Britannica. Any user generated content site is only as good as the contributions made by users, however the transparent revenue sharing model combined with a focus on a hot vertical (celebrities) may tide it well going forward, particularly in tapping into the celebrity obsessed mainstream. 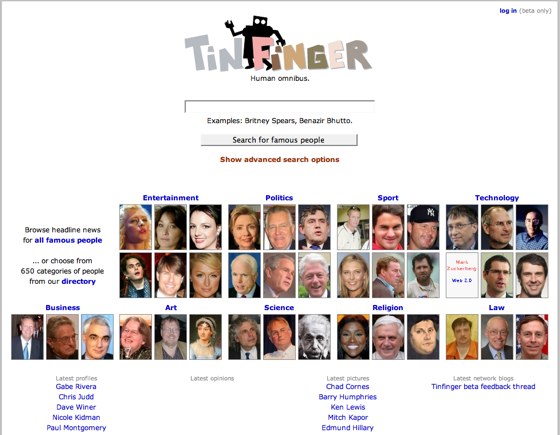