Video clips from local TV news affiliates are making their way onto the Web through a service called ClipSyndicate that’s been in beta for more than a year. The service, which is owned by New York City startup Critical Media, has more than 200,000 archived news clips and adds about 1,000 a day from about 200 local affiliates of ABC, NBC, CBS, and Fox, along with video from Bloomberg TV, the AP, UPI, and the New York Times. About 350 niche Websites are participating in the beta—including Military.com, Construction.com, and PetHealthFocus.com—and they collectively serve up two million ClipSyndicate videos a month. 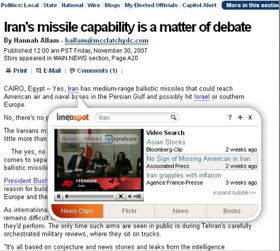 To get a sense of the entertainment value of some of this stuff, here is a news clip from a local Oregon station about a man with blue skin who is moving to California in search of more tolerant neighbors:

ClipSyndicate serves ads with the videos and splits the proceeds as follows: 30 percent to the content producer (i.e., the local TV station), 20 percent to the API partner or Website where the video is seen, and 50 percent for itself. (Although the beta and APIs are available by invite only, the company plans to open up participation to all comers by the end of the first quarter). 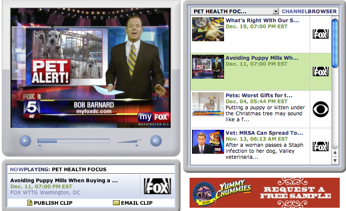 Critical Media CEO Sean Morgan tells me that he is getting $50 CPMs on the video ads sold through his salesforce compared to $8 to $12 CPMs from backfill video ad networks because the videos tend to appear on extremely targeted sites. Think Yummy Chummy ads on PetsHealthFocus. His sweet spots are mortgage, pets and animals, and health sites. He also claims that he is seeing close to three percent click-throughs on his graphical banner ads compared to quarter-point click-throughs on run-of-network ads.

What he is excited about, though, is marrying the brand advertising of video with the specificity of search. Truveo, for instance, passes the search terms through the API, so that can inform what types of ads are shown, in addition to the actual content of the video. As ClipSyndicate’s business model develops, we’ll see if it is actually possible to make money from the long tail of video (although note that this is still professional-quality video, and much higher up the curve than most of the audience-generated video on the Web).