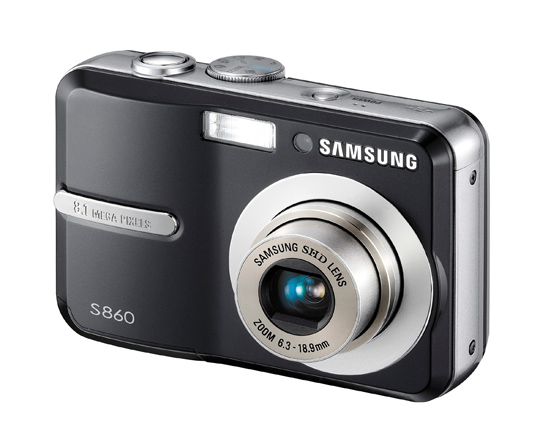 Samsung just dropped a ton of digital cameras and here they all are. The S-series includes two entry-level models, the 7.2-megapixel S760 and 8.1-megapixel S860. Both feature a 3x optical zoom, Samsung SDH lens and Digital Image Stabilization as well as face detection and self portrait mode. Also featured is a special effects button, “E”, that lets you resize, rotate, adjust brightness, contrast and saturation levels, red eye fixin’, and the ability to change color schemes. Movies are shot in 320×240 or 640×480 at 30fps in AVI.

THe L-series has three new additions in the form of a 10.1-megapixel L210, 8.1-megapixel L110 and L100 with the same sensor. Each has 3x optical zoom Samsung NV lens with 2.5-inch LCD and most, it not all, the other goodies included on the other cameras.

Rounding out the plethora of digis is another NV with PMP features. The NV4 is an 8-megapixel with all the aforementioned goodies. It features an i-movie mode, high-res SVGA MPEG-4 video and editing controls. ISO tops out at 1600 and has a 2.5mm headphone port and external speaker boasting SRS 3D acoustic tech. The retail on this will be $279.