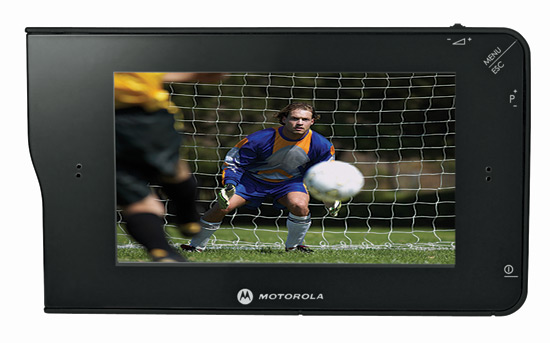 It’s mobile a TV and no, you can’t have it yet.

Prognosticating always gets you into trouble, but I’ve been keeping my eyes on announcements from CES and want to make a few basic predictions. While I can’t promise any of this will happen, I do know that these things have to happen in order to maintain the endless whirlwind of innovation and improvement we’ve been seeing in the past few years, especially when it comes to media and home theatre systems. With that in mind, let’s jump right in.

Blu Ray and HD DVD are dead. Long live Blu Ray and HD DVD – Sorry, guys, but buying a single-format drive is a bad idea. Hybrid drives are the way it’s going and no amount of “HD war” talk is going to change that. These companies have to get drives, discs, and content out the door or they’re going to miss out on the chance to fool convince millions of consumers to buy HD formatted movies. This is the last gasp of the plastic disc industry and CES 2010 will feature — and I’m sure of this — a sub-$100 hybrid HD drive from a minor player, essentially allowing us to call it a draw.

Wireless in the home will take off – Most major TV manufacturers are going to be offering ways to wirelessly connect your TV to your receiver and, potentially, your satellite speakers. These solutions won’t be cheap but they will be very useful and usable and may finally allow you to stick your plasma on your wall without having to snake cables through drywall.

Wireless content to cars, pedestrians, commuters will happen, but not the way phone carriers think it will – For years, fools like us have marveled at DVBH and other fairly high-definition services available to commuters in Asia and parts of Europe. Well, it’s coming here as well and it should be popping up slowly as WiMAX rolls out. I think folks like NBC and ABC will see the value in broadcasting to digital handhelds that can actually do justice to the picture. Video on cellphones is for shut-ins and New Yorkers — no where else in the US do you have the concentration of train commuters you have in Asia where these mobile TV services are popular. Give people good quality video over the air using WiMAX and you’ve got a business model.

Streaming in the home will be mainstream – With LG teaming up with Netflix and others soon to follow, watching a movie on the celestial jukebox is getting much more interesting. Again, the guys we expected to win this game will lose as HD content availability becomes another sticker on the box, just like Rhapsody is now.

Open source will hit the home, big time – HP is already selling Linux-based disk arrays and companies like LaCie are selling Linux-enabled servers. It’s only a matter of time before most of the devices in the home are running some form of Linux, which will make them considerably smarter than they are today. You will soon buy a terabyte drive, plug it in, and start sharing content to all the boxes in your house including your gaming consoles and your handhelds.

This is the year of the slow burn – The iPhone defined 2007 and it’s going to take at least until 3GSM in February for anyone to come out with anything remotely as interesting. TV players will fight the thinnest LCD war, peripheral folks will start thinking about ways to appeal to green consumers, and the consumer will sit most of it out until something really compelling hits the scene. I’m just not feeling an impending explosion this year, but again, prognostication is a dangerous game. Impress me, CES. Impress us all.

● Termination of government contracts due to unilateral government action;

● Differences in anticipated and actual program performance, including the ability to perform under long-term fixed-price contracts within estimated costs, and performance issues with key suppliers and subcontractors;

● Changing customer demand or preferences for business aircraft, including the effects of economic conditions on the business-aircraft market;

● Reliance on a large fleet customer for a significant portion of the firm aircraft contracts backlog and the majority of the options backlog; and

● The status or outcome of legal and/or regulatory proceedings.