Nearly missed new years day was an announcement from Yahoo that Yahoo Picks service was to shut after 12 years.

Launched in August 1995, Yahoo Picks highlighted the best of the web in a weekly, then later daily update service in an era prior to blogging. The site eventually evolved to a full blown blog in 2004.

Many new internet users in the mid 90s started on the web in roughly this order: Yahoo’s Front Page, Yahoo’s Directory , then for cool sites they’d head to Yahoo Picks. I can still remember using Yahoo Picks in late 95; there wasn’t an awful lot else around and the sites Yahoo picked at that stage were often amazing, particularly for a new internet user like myself at that time.

Yahoo did not post the reasons for shutting the service, but in an age of mass produced and often automated link swapping and recommendations, the service is by comparison archaic, and probably not seeing an awful lot of traffic. Many of the original pages are still up, complete with their mid 90s livery. One shot below, and a direct link here for those wanting to go for a walk down memory lane. 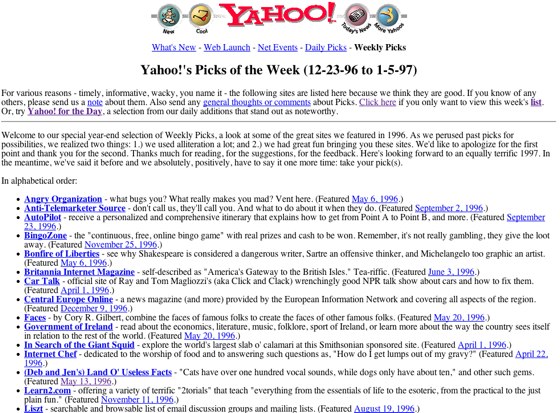