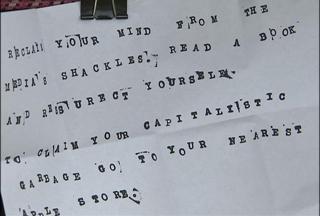 Some poor kid was expecting to receive a new iPod (Touch or Classic not specified) but instead received what appears to be a viral message from either a filthy commie or Adbusters. The note instructed her to reclaim her mind from the “media’s shackles” and read a book. It doesn’t say which book, but I’m guessing not something from Oprah’s Book Club.

It also directs directs her to claim her “capitalistic garbage” at her nearest Apple store — problematic, since she bought it at a joint in Maryland called Germantown. I guess with things like this happening there, they should change their name to East Germantown. Zing!

Girl Gets Bizarre Surprise Instead of iPod [My Fox]