BravoNation, a site that allows users to send electronic awards to others, is the most recent product launch from Yahoo Brickhouse. Brickhouse head Salim Ismail sent me an invitation to try out the service this evening. I dove in – and this is one screwball product.

The point of Brickhouse (I think) is to come up with half baked ideas, throw them against the wall, and see what sticks. That means they shouldn’t launch bland, safe products. Instead, they go a little crazy, and probably expect a high failure rate. We recently covered FireEagle from Brickhouse, a very promising platform for leveraging location information.

I suspect FireEagle will be a hit over time. BravoNation, not so much. Right now it’s basically a greeting card site with a currency attached to limit the number of awards that can be sent (and thereby, presumably, to attach artificial value to the awards). Users choose from a variety of pre-selected images and then write their own message. There are a number of examples, such as “You’re My Best Friend!” and “Thanks for Saving Me From That Creepy Date!” You can also use a basic Flash tool to draw your own image. The FAQs say that soon users will be able to upload images, too.

Sending a Bravo costs Bravo Bucks, or Bruckos for short. Accounts are refilled every eight hours, which may be a bit of wishful thinking from the Brickhouse team.

There are a few other bells and whistles – an API is discussed in the FAQs, for example. And eventually images drawn by users may be shared so that others can send them, too. But for now all I see is a very rough ecard site that has scores of entrenched competitors.

BravoNation is in private beta. We’ll add it to InviteShare in the next day or so and give out a few accounts for people to try out. (Update: Put your email address down for an invitation here). The screenshot above (click for large view) shows the Bravo creation process. Below is a shot of what the award looks like for the recipient. 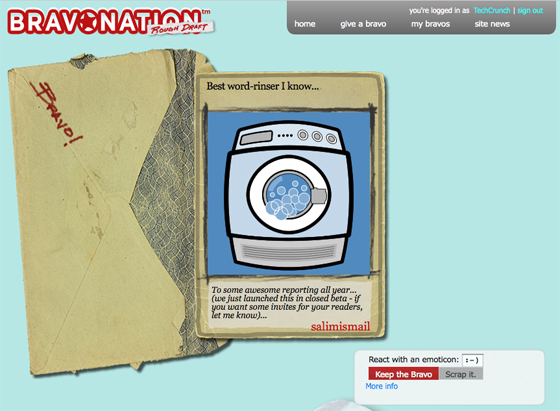