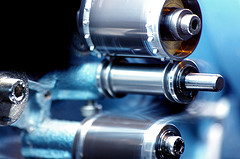 As movies go digital, they are presenting new archival challenges for the film industry. Film cannisters stored in a salt mine last a lot longer than a hard disk drive or a DVD. The issues of preserving film footage for the ages in a digital form are real and vexing, but a recent report by the Academy of Motion Picture Arts and Sciences titled “The Digital Dilemma” throw out some alarmist numbers that are hard to swallow. According to a story about the assessment in the NYTimes:

To store a digital master record of a movie costs about $12,514 a year, versus the $1,059 it costs to keep a conventional film master.

Much worse, to keep the enormous swarm of data produced when a picture is “born digital” — that is, produced using all-electronic processes, rather than relying wholly or partially on film — pushes the cost of preservation to $208,569 a year, vastly higher than the $486 it costs to toss the equivalent camera negatives, audio recordings, on-set photographs and annotated scripts of an all-film production into the cold-storage vault.

The big numbers help to sex up the “dilemma,” but they appear to be yet another case of Hollywood accounting. The rule of thumb for storing a movie in a high-quality digital archive seems to be about one terabyte per hour. So two terabytes should be enough for most digital masters. Consider that a one-terabyte consumer drive at Amazon costs $250 to $300. The cost per terabyte is much less in an enterprise-class storage network. Of course, that is just the hardware. There are additional costs of facilities, labor, maintenance and licensing costs, but these can be spread across an entire library of movies.

Now, that is just for the final master copy. The movie studios want to store every outtake and bit of footage captured during the film-making process, and that is where the $208,569 a year comes from. For a single movie, that must amount to many, many terabytes of footage. But again, it is difficult for me to suspend my disbelief here. Storage costs are not constant per terabyte. They scale the more you have to store. The true cost of a well-managed storage program (one where everything is backed up redundantly in more than one location, and where the actual storage technologies are constantly upgraded and swapped out to higher-capacity technologies over time) would surely be much less. (Any storage experts out there willing to venture an educated guess in comments)?

Even if it does turn out to cost $208,569 a year, there is another solution: hire one or two people per film to go through all the extra footage and cull it down to a more manageable amount. Remember, we are just talking about the footage to be stored in a high-quality archival format. You can still store everything else in lower-quality, compressed MPEG-2s or MPEG-4s. The big numbers, though, make it easier to scare up funding for digital archive projects—or to rationalize a slower transition to digital altogether.