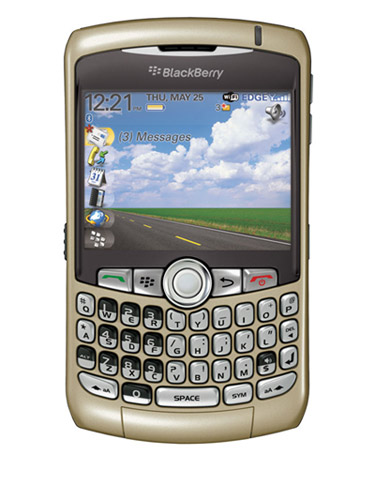 Two years ago, my dumb school made me take an art class. Awful, yes. There were several classes that fulfilled the credit requirement, but for whatever reason I decided to take a film class. Actually, no. I know exactly why I took it: I figured it would be easy to skip so I could watch the Champions League group stage. Worse comes to worse, I figured, I’d just go to Wikipedia the night before an essay was due, get the gist of the plot and the theme, and BS my way through the paper. It worked like a charm.

The professor, Ed Guerrero, however, was a jerk. He was one of those hippie guys who hate technology and think Cinema is God’s gift to humanity. “The Cinema inspires man to greatness.” Oh shut up, already. We had several back-and-forths in class re: his hatred of technology.

His favorite piece of technology to pick on, without question, was the BlackBerry . This insightful comedian, with doctorates in annoying and had the nerve to call it a “CrackBerry”—in all seriousness!

“How many of you students have a CrackBerry?” he was fond of asking. “You all should be shamed of yourself. You’re slaves to your device, maaaaan.”

So let’s assume you’re not a complete tool like that guy was and you do, in fact, want to know what’s the deal with BlackBerry this year. Good thing you came here then.

In Ye Olden Days, it used to be that to get access to e-mail and the Internet while on-the-go, you needed a BlackBerry; you couldn’t, and still can’t, walk around New York’s Financial District without seeing every guy in a Mens Warehouse suit tooling around on his BlackBerry. This is not longer the case. With devices like the Helio Ocean, a favorite of many of us on staff here, and the Sidekick, you can get your news and weather without necessarily looking like middle management. There’s also something called an iPhone that does all that, too, but it’ll never catch on.

So, really, you don’t need a BlackBerry anymore. But, heck, let’s say you want one anyway. Let’s say! What are your choices with respect to the main carriers here?

If you’re lucky enough to be a VZW subscriber, then you have four to choose from, two full-sized ones and two, I don’t know, pint-sized ones, à la the Peral, which I’m sure you’ve heard of. The highlights…

VZW users have access to arguably the nicest looking BlackBerry on the market right now, the 8830 World Edition. Since VZW uses CDMA, as Peter explained, you’re not likely to be able to take it overseas. You can use the 8830 World Edition stateside and overseas, amazingly enough. But because it’s VZW, don’t expect any favors: there’s no Wi-Fi and no camera (but there is a media player). So if you’re needing to browse the Web, be prepared to pay for VZW’s expensive data network. It’s the most feature-rich of VZW’s offerings, save he lack of camera.

Smaller than the 8830, the Pearl 8130 adds one thing that the 8830 doesn’t have: a built-in camera. If you can live without the full QWERTY keyboard (and don’t plan on making too many overseas trips), then the 8130 represents a better value.

The New AT&T has three main models to choose from, not counting the different color variations or models being phased out.

Since AT&T Old Yeller’d the 8300, the 8810 is the only Curve you’ll find on the network. Its adds legitimate GPS capability and comes with built-in support for Telenav Maps. (Or you could just fudge the numbers and use the new Google Maps for BlackBerry.) Again, no Wi-Fi, but there’s a 2.0-megapixel camera, media player, the works. It’s sorta a shame, because if it had built-in Wi-Fi, you’d never need to buy another smartphone again.

Unlike the prettier Curve, the 8820 does have Wi-Fi, which, for me, makes it the one to get. It doesn’t have a built-in camera, however, so you’ll have to decide whether or not the extra $50 is worth Wi-Fi at the expense of a camera. No GPS here, though.

Yes, AT&T also has the Pearl, but they have them available in both black and red. It’s the same as VZW’s. Note that it’s $50 cheaper than VXW’s model, though.

Sprint, the other main CDMA provider here, has a few of its own.

The 8830 works both here and abroad. It supports GPS, but, again, lacks Wi-Fi. I really don’t see how you can buy a multi-hundred dollar phone in 2008 and not get Wi-Fi, I’m sorry.

In addition to the Pearl that I’ve written about 18 times now, Sprint still carries the old 71xx line of BlackBerry. They’re similar to the Pearl in that they’re candybars, but they lack some of the more advanced features, like multimedia support. Unless you’re scrounging for dollars—I don’t see how you could be if you’re in the market for a BlackBerry—I’d spring for the Pearl if you want a candybar.

Lastly, T-Mobile. T-Moible is sorta weird for me: I know they usually have some of the better phones out there, but coverage in New York, in my experience, isn’t so great. Comparing VZW to T-Mobile is almost unfair.

BlackBerry Curve 8320
$249 after discounts and contract

If I were given the choice to pick any model, it’d be this one, primarily because it has both Wi-Fi and a built-in 2.0-megapixel camera. It does not have GPS, but like I said earlier, the new Google Maps sorta makes that irrelevant.

BlackBerry Pearl
$99 after discounts and contract

Same deal as the other Pearls.

Picking what BlackBerry is right for you is largely a matter of what carrier you have, or what carrier you have to have (for coverage reasons). Consumers, that is, regular Joes like you and I, have two basic choices, the Pearl and the Curve; the 88xx line is more aimed at business users who don’t want “fun” things like a camera.

I’d say the best value is T-Mobile’s Curve. If you’re getting a BlackBerry, you might as well spring for the full QWERTY and T-Mobile’s has both Wi-Fi and a camera. For my uses, Google’s new Maps app is all the GPS I’ll ever need, Living in New York, I really have no use for the turn-by-turn directions that Telenav supplies.