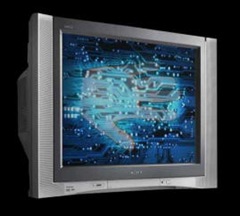 Sony wants out of the rear projection TV game and what Sony wants, Sony gets. Well, except for record-breaking sales of PS3 consoles — hay-oh! Still got it.

Anyway, the move isn’t all that surprising as other TV manufacturers have made or likely will make the same decision. Sony actually has about 28 percent of the rear-projection market here in the US but it’ll trade it all in to concentrate on LCD TVs, "because that’s what people really want," according to a company spokesperson.

Other companies that have stopped or will soon stop manufacturing big, heavy TVs include Philips, Toshiba, and Hitachi. Samsung, Mitsubishi, RCA, Panasonic, and JVC are still hanging in there, though.