Can anyone truly define what a smartphone is? It’s been something I’ve been asking everyone at CG and no one seems to know exactly what it is. Just about every phone on the market can be considered a smartphone if you believe it to be something that does anything other than making calls, but that’s obviously not it. It’s essentially any device that gives you the impression that you’re on your PC. It has its own OS (WinMo, Symbian, Linux, Palm and RIM) and allows for third-party software. They also should have Office and Exchange integration right out of the box and system-wide copy/paste. As Matt put it: “well, smartphones are like porn: you can’t really define it, but once you see it, you want to put it in your pocket to show off to your friends later.” Well said Matt, but there are some not-so-smartphones that give off the same impression and do just about the same things.

Danger’s line of Sidekicks changed the landscape of mobile messaging devices by bringing smartphone-like features into the mainstream while still looking and being cool. I, myself, have owned the Sidekick 2, Sidekick 3, Sidekick iD and Sidekick Slide. Because of these devices I’ll never be able to go back to a non-QWERTY device. It would be wrong and immoral. The Danger OS is so easy to use and navigate that even an 80-year old could figure out. But it’s strapped down and limited in terms of applications unless you’re in the developer community and even then nothing exceptional is out there. It can’t do Exchange and lacks the features we’ve grown to love that other smartphones have like Wi-Fi and an alarm clock. You have to pay for the alarm clock and that’s BS.

It’s a great device, though. There’s a reason I went through four generations of it. The QWERTY is the best on the market hands down. Everything is laid out nicely. It has the best suite of IM clients that are built-in. I stayed with the Sidekicks because of its AIM client and POP e-mail. It still caught the eye of girls when I was out too. The Slide was a damn sexy device despite its power cycling issues. But I’ve grown out of them and the Slide/LX was what I wanted from the Sidekick 3. Sorry, Danger/T-mo, but I’ve moved on. If the next generation has all the features that are available in devices at that time then maybe I’ll consider coming back. Put a better camera in it, too. It’s a great messaging device and does what anyone needs it to do in that respect. The unlimited data plan is the cheapest around as well.

My next not-so-smartphone comes from LG and runs on Sprint’s 3G network. The Rumor is a lightweight enV that focuses on messaging with dual keyboards. It has all the necessary features you’d expect from a smarphone that isn’t a smartphone like a QWERTY, camera, Bluetooth, Web and e-mail. Works as a storage device, too. Holding up to 4GB of your music, photos, voice memos and video. The included planner, scheduler, calculator and alarm clock keep you in the know. It’s a QWERTY so you’re bound to get some stuff done on it. 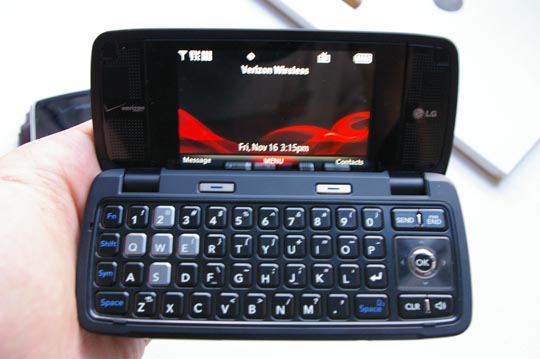 The Rumor’s big brother, the Voyager, teeters on the verge of being labeled a smartphone, but a haptic touchscreen does not qualify. Not in my book, at least. It’s packed with loads of features, but no support for third-party apps and Verizon’s proprietary UI cripple what it’s capable of. It’s a great multimedia device, though. The keyboard is very nice, but a little too spread out and big for my taste. You can’t go wrong with two screens and the haptic touchscreen is pretty cool to play around with. It’s certainly a step up from the enV and Rumor, but doesn’t compete with BlackBerries or WinMo devices.

The Samsung SCH-u740 is in no way a smartphone, but it’s unique 2-way hinge is hard to ignore since it reveals a QWERTY on what appears to be a standard flip phone. LIke I said before, most phones these days come packed with what are now considered standard features. It has camera, music player, Bluetooth, and memory expansion. It gets a mention because of its QWERTY.

My least favorite of the bunch is the iPhone. The camp is divided on this one. You either love it or hate it. It’s too locked down for me and it’s not 3G. It’s a glorified iPod Touch and everyone knows it. Those who e-mail and text pretty heavily will not like or survive with the iPhone. It’s more of a media device than anything else. I wanted one in the beginning and almost took the plunge after the price drop, but I’m glad I didn’t. BlackBerries are the the way to go and my Curve and Ocean kick the sh*t out of the iPhone. I’ll wait for the next one, but I doubt I’ll be dropping any coin on it. Truth be told, everyone else has been working on similar things, but they don’t have the advertising or R&D dollars Apple does. Not everyone is riding on Apple’s coat tails.

My favorite of the not-so-smartphone bunch is the Ocean from Helio. Matt and I are fanboys, but there’s definitive reason behind it. Sure it does Mail for MSE, but it’s not quite on par with other smartphones on the market. It’s the quintessential messaging and multi-media device. The dual slider design is ingenious. It appeals to both QWERTY users like myself and those who just can’t give up on T9. The list of apps is long and stupendous, but we’ve mentioned them once or twice before.

If you don’t want a smartphone but want something right on the verge then take into account exactly what you need out of it and which carrier you’re willing to tolerate. This was not meant to be a guide, but it sort of is, I guess. Consider these training wheels to see if you’re ready for the big leagues. It’s quite painless.