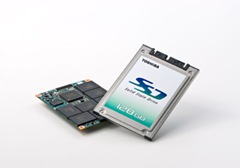 The conventional notebook hard drive continues to face down its inevitable replacement as Toshiba today announced that it’ll be entering into the solid state drive game.

Mass production will begin in March of next year with 1.8-inch SATA drives being offered in 32-, 64-, and 128-gigabyte capacities. Throughput for the drives will be 3Gbps with a maximum write speed of 40MB/second and a maximum read speed of 100MB/second. No word yet on prices but the more of these drives that hit the market, the cheaper they’ll cost.