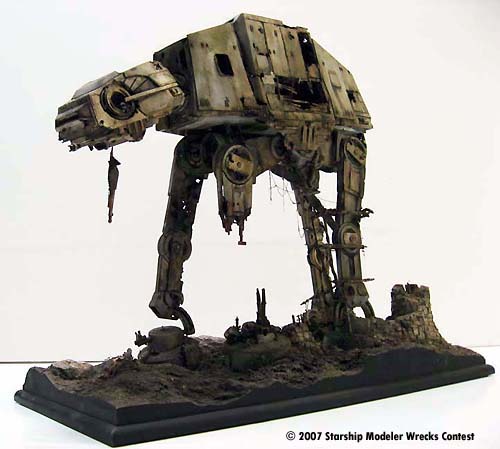 In the great war between the Rebellion and the evil Empire, there were casualties on both sides that cannot be counted. Suffice it to say that each contender made a mark on the other, swapping lightsaber wounds for blaster scars, neither willing to admit defeat until the final moment when a penitent Darth Vader threw a merciless Emperor down a plasma-filled reactor shaft.

That’s not to say there weren’t wastes of other things, as well. X-Wing fighters were turned into interstellar scrap, Death Stars became debris fields, and AT-AT walkers were shown to not be as invincible as once thought.

This model, by Dimitri Kaliviotis is an excellent example of just such ruin, and is one of the coolest things I’ve seen this year.