Technorati has a brand new CEO, and he’s been busy in his short time with the company. Today Technorati is relaunching, with a new core focus on bloggers.

Last week I saw a demo of the new products, which CEO Richard Jalichandra and VP Engineering Dorion Carroll say reflect the company’s re-dedication to their core audience: bloggers and advertisers.

The recently changed home page, just three months old, is gone. In place of the streaming blog posts is a news aggregator that, like TechMeme and the New York Times’ Blogrunner, use linking behavior on news sites to determine headline news.

Blogs and mainstream media are separated. Blog headlines are on the left; MSM is on the right. Below each headline is a cluster of blogs that have linked to and discussed the story.

The news aggregator complements Technorati’s core strength as a blog search engine, Carroll says. Sometimes users want to search. Other times, they want to discover and browse. The news aggregator helps them see what bloggers and journalists are talking about right now, all over the world.

This is something Technorati experimented with in the past (see our 2005 coverage of Technorati Explore, which never made it out of the lab), but it never dedicated meaningful resources (or the home page) to finding news patterns in blog posts. Now, the company is dedicating those resources to making it work.

In addition to the Front Page news aggregator, Technorati is making two other big additions to the site.

The first is a resource page for bloggers called, fittingly, Blogger Central. It shows blog posts about blogging (clustered using the news aggregator engine) as well as popular blog tags at any given time. The page also has top blogs by links and popularity.

The second, pictured left, is a new product called Today In Photos. Like AOL’s new Mgnet product, it shows popular news via the photos and images included in those news items. People like to see and click on images. This page will show them what’s hot, visually. Users can reach the page by clicking on the grouping of images on the bottom of every page.

The new products are encouraging signs from Technorati, which has had to reinvent itself a number of times over its existence. Their core blog search business has been under fire from Google and others for some time. But the site is still synonymous with blogging for most of us, and has a store of goodwill that has yet to run dry. 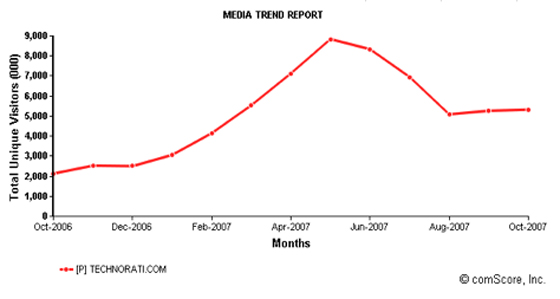 Comscore and Compete show slow and erratic growth over the last year. Comscore says they have 5.3 million unique visitors and 20 million page views per month, up from 2.1 million and 9 million, respectively, a year ago. Technorati says those numbers are about half of what their internal stats show.

Will the new product drive core usage and page views? I think it has a real shot. It’s much better than the existing home page (and the one before that, which really pulled away from bloggers). I already visit Technorati multiple times per day. I can see increasing that usage with the new stuff.

On a side note, when I met with Jalichandra, he said the company has raised $21.6 million in venture capital over three rounds of financing. The company has never dislcosed financings before, leaving us and others to speculate based on the occasional publicly filed document to piece it together. Now we have a firm number (and we’re updating CrunchBase).