Ever wish you could just take over your Mom’s computer when she calls you with a PC problem? A free peer-to-peer app called CrossLoop lets you do just that, acting like one of those pricey, help-desk applications used by corporate IT departments. You have to first download it to both your PC and your Mom’s and then when it is launched you can remotely see whatever is on her desktop and take it over to fix it from 3,000 miles away.

The eight-person startup just raised $3 million in an A-Round led by El Dorado Ventures (which is also an investor in Coghead). CrossLoop’s P2P app has quietly gained a following among the do-it-yourself tech support crowd (it only works on a PC currently, but Mac and Linux versions are coming). “CrossLoop is for both family and businesses” says co-founder Mrinal Desai. The company says it has 300,000 users worldwide who have collectively used the application for more than 12 million minutes of desktop sharing. The first million minutes took 154 days to accumulate. The last million took only 11 days.

Today CrossLoop is also launching a redesigned site that comes with free accounts for anyone who wants to make a business out of CrossLoop, or just share their expertise. The profile page shows how many sessions you’ve had on CrossLoop, along with comments and ratings from the people you’ve helped (or whose computers you’ve messed up, depending on your skill). You can watch a demo video on YouTube.

The idea is that IT consultants could use these profile pages to build a reputation. And it is not just for help desk issues. You could use CrossLoop for remote training on applications like, WordPress, PhotoShop or Final Cut Pro, really anything where you have to show someone how to do something on a computer. After every session, the person you helped can rate you and comment on the session from inside the CrossLoop app. That information then gets automatically updated to your profile. There is also a widget you can put on your own Website or blog that updates your CrossLoop stats as well. 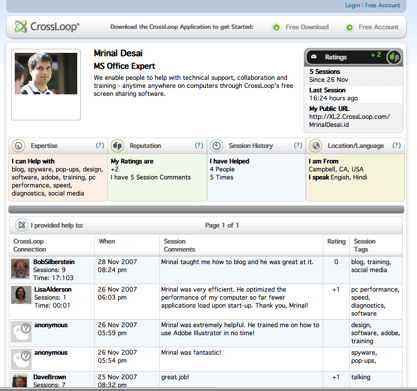