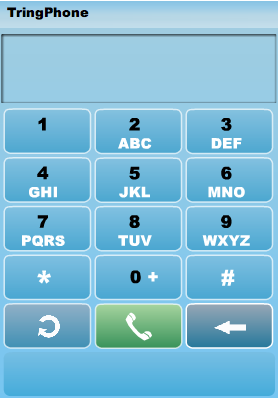 Here come the Flash phones. Most Web-based phone services require a separate application like Skype or Gizmo. Or, like Jajah, they use the Web primarily to initiate a call on a regular phone. But Flash-based Web phones are bringing VOIP calls directly to the browser. Last month we covered Russia’s Flashphone. Now another SIP-based Flash phone is coming out of India’s TringMe, which launched in October with a click-to-call widget. (Update: See also Ribbit).

The TringPhone, as it is called, really is more of a technology demonstration than a full-fledged service. TringMe is hoping to license the technology to VOIP providers and help make Web-based telephony as simple as visiting a Web page. It already works with any existing account on a SIP-based phone service, and can be configured for pretty much any VOIP provider. I tried out a demo of the TringPhone, and it completed a call to my U.S. cell phone. Starting later today, the TringPhone should be available on TringMe’s Website.

The startup is also working on a mobile VOIP service that will let you make SIP calls from your phone’s browser over a 3G data network. That one probably won’t be based on Flash.