Jared Kopf thinks that ad networks should be more like social networks. A member of the PayPal mafia (he also helped start Slide), Kopf is now CEO of Adroll, a social ad network that launched in private beta last week. (The first 100 TechCrunch readers to register and type in the promo code “Crunchroll” will get a beta invite).

The last thing the Web needs is another ad network, but Adroll is at least trying something new. It lets niche publishers self-organize into communities of interest so as to have a better shot at attracting advertisers. For instance, in the “Surfing Ad Community,” there are currently eight surf sites that collectively attract an audience of half-a-million per month. There is also an “Alt Music Community” of music blogs. Any publisher can create their own community or ask to join an existing one. Kopf explains this to me in an e-mail:

(Communities can be a) Open, b) Members Can Invite, and c) Only Leader Can Invite)

This actually allows publishers to form communities that are exclusive, or semi-exclusive. So you could form the TechCrunch Ad Community that is made up of smaller tech-focused blogs that you rep. Or a community of “Breaking News Sites.” Sites can join by “friending” you…and you approve (or deny) their admission.

The big point of differentiation for us is that we . . . use a “social-networking”-style matching system to enable publishers to create their own networks, and help publishers to sell more, at higher CPMs by working together.

Well, that’s the idea. You create your own adroll, just like a blogger would create a blogroll with other related blogs. Except that advertisers can buy ads across that blogroll. They can also buy ads across a tagroll. When publishers set up their profiles they choose tags to describe their site, like “surf,” “celebrities,” or “web 2.0.” And advertisers can buy those tags. Advertisers also have their own profiles, with their own tags. So publishers interested in attracting a certain advertiser need only look at its tags, add them to their own profile, and hope for a match. Thus, the tagrolls could end up being so easy to game as to render them useless.

The bigger question for Adroll is whether advertisers will bite at all. Do they actually want to reach the Long Tail of surfing sites, or just stick with the most popular ones they already can get through other ad networks? The bigger the adroll, the more appealing it will be to advertisers. But become too big and generic, and the communities lose their targeting advantage. Also, most advertisers are used to spraying ads at certain demographics, but Adroll communities are organized by interests. That could be another problem.

The bulk of advertising still goes to the top handful of sites on the Web. So anything that gives niche sites more of a fighting chance is worth trying. Adroll is offering them a new way to band together. Whether advertisers will care depends on how cool the publishers can come across. The same as any other social network. 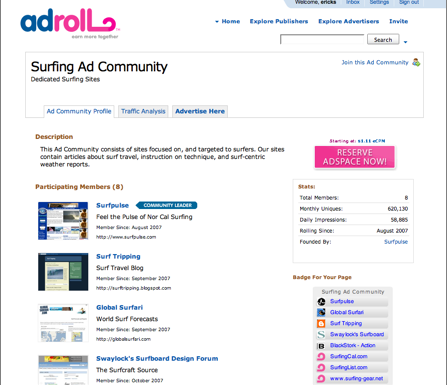