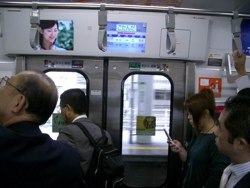 With all the talk about Amazon’s Kindle, there’s a bigger revolution taking place and those who studied classic literature will be horrified. In Japan, half of the top ten selling works of fiction in the first six months of 2007 were composed on mobile phones.

According to the Sydney Morning Herald, mobile phone novels (keitai shousetsu) have become a publishing phenomenon in Japan, “turning middle-of-the-road publishing houses into major concerns and making their authors a small fortune in the process.”

One book, Koizora (Love Sky) about high-school girl who is bullied, gang-raped, becomes pregnant has sold more than 1.2 million copies since being released.

The mobile internet has a role in this growing phenomen in Japan, with another book Moshimo Kimiga (420,000 copies) starting with installments uploaded to an internet site and sent our to “thousands of young subscribers.”

Notably, at least when considering the Kindle, is that the Japanese market happily pays for mobile books as well; we’ve quoted hard copy figures here but there are many more Japanese viewers paying to read this content online via their mobile phones.

I can’t see anyone in Western nations waking up tomorrow and seeing mobile phone composed novels on the top seller lists, but usually Japan is years ahead on many tech fronts; mobile phone data services were available and popular in Japan years ago as the rest of us are only now catching up. Perhaps the NY Times best seller list in 2012 might consist of keitai shousetsu, stranger things have happened.