Flux, a new social network joint venture between Viacom and SocialProject, had a limited launch in September.

The platform is the cornerstone of Viacom’s social network strategy. Instead of building independent networks for MTV and its hundreds of other brands, they’ve built a distributed platform that shares users, infrastructure and content, but allows for distinct branding and community building around each property. And Flux isn’t just for Viacom – third parties are using it as well.

When Flux launched it had only a few hand picked non-Viacom partners. Today they are opening up the platform for anyone that wants to join.

Like Ning, it’s fairly easy to create a Flux social network. The look and feel can be customized via templates or by uploading your own CSS, and the network can be mapped to your domain name.

Once created any Flux member can join your network with a single click. Since Flux is already gaining users via their launched Viacom and other properties, this gives young communities a deeper pool of users to draw from. And the fact that new users do not need to create a new profile, friends list or login credentials gives them a greater incentive to join. User data is exportable, Flux says, if the partner creates a privacy policy stating that. 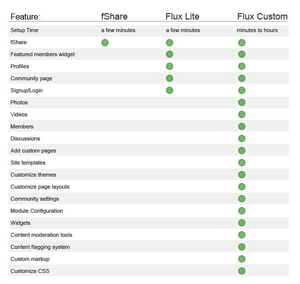 Partners have three integration choices. fShare, the basic integration, allows users to take content from the site and easily embed it into other social networks. Flux Lite allows partners to create a basic social network. Flux custom gives nearly full control over the look and feel and has additional features. Partners can choose any integration, it just takes a little more work to use the custom features. Flux will add new developer features over time as well. The chart to the right (click for larger view) shows the various options.

We’ve created a test social network on Flux, at techcrunch.flux.com. And we’re also integrating their fshare functionality into the main TechCrunch site as an illustration of how it works – see the button below each post.

Flux partners can choose to show Flux ads on the site, or use their own. Flux says they are currently selling at a $1.50 CPM and will split that 50/50 with partners. If a partner chooses to display their own ads instead, they must split revenue with Flux 50/50 as well.

Flux and Ning have very similar features and will compete for communities looking to build a social network (and there are lots of other choices as well). Ning has an established platform, lots of money, and 130,000 existing communities (including Playboy). Flux also has a great platform, and the leverage of all the Viacom properties to promote it.

Ning sees the threat from Flux. CEO Gina Bianchini wrote a fiery point-by-point comparison of the two services earlier this week – Flux disputes some of the facts.