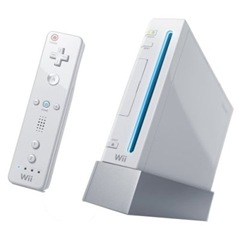 I wish my Wii could download movies and television shows. It can’t…yet.

That might change soon or it might change later or it might not change at all. Nintendo president Reggie Fils-Aime isn’t sure yet. He’s still too busy trying to produce enough consoles to meet demand. After that’s taken care of, he says that his company will begin to explore other channel opportunities.

In Japan, Wii owners recently got access to a service on the Wii that displays TV listings similar to a TV Guide-like interface. Apparently "TV in Japan is notoriously weird," according to CNET and no such service existed.

Over here in the US, it’d be nice to see Wii-based movie downloads, TV show downloads, and a YouTube browser. The payment infrastructure is already in place with the Wii points system, now it just needs to be implemented.

In lighter news, Reggie also said that the Wii shortage this holiday is a channel problem and that there isn’t a warehouse in Guatemala where thousands of Wii are being held ransom by Wario and King Koopa. Seriously. They’re just screwing up and not meeting demand. Thanks, Reg.

Will the Wii be a set-top box? [CNET]