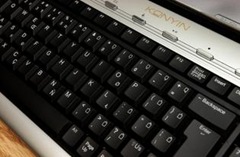 Whuh oh. There’s something called the Konyin keyboard that basically has a second shift key function which allows its typist to use the different letters and symbols of Latin-based alphabets from around the world.

The company that developed the Konyin keyboard, Lagos Analysis of Nigeria, is now claiming that Nicholas Negroponte and the OLPC project bought a pair of the keyboards "with the express purpose of illegally reverse engineering the source codes" in order to develop a similar keyboard for the OLPC XO laptops.

That’s a pretty bold claim and, if true, could spell even more trouble for the project.