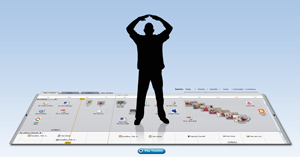 The company is developing a product, currently in private beta, with which you can lay out your digital assets (emails, photos, videos, documents, etc.) along a digital timeline. While few details about AllofMe have been revealed, it appears as though you will be able to include media files from online services such as Flickr and YouTube.

Founder Addy Feuerstein has described AllofMe in the following way:

“The idea is that if I or someone else has a picture that includes my son, alone or with friends, I or anyone else will be able to tag the people in the picture and transform these digital assets into part of my sons. When he grows up and takes control over his own timeline, he will have a timeline of tagged material from his childhood…We will also transform the timeline created by each person into a video movie, through a widget on an internet site [and] enable comparison of your timeline with that of your acquaintances, or chronological data files. For instance, you will be able to compare your own timeline with historical events of Time, and see where you were when some important world event occurred.”

via Haaretz. Thanks Orli.